In a world where deities are an undeniable fact, it seems strange how often faith, religion, and everything in between are reduced to a mere afterthought in 5E D&D.

Where are the sacred oaths that aren’t just lame excuses for the paladin to act all righteous? The fearsome celestials that the heroes will actually have a chance to fight? The cool rituals, the holy organizations, and the mysterious divine agents?

Well, since they aren’t anywhere to be found in official 5E publications from Wizards of the Coast, we decided to share our top 10 tips to make the divine an interesting part of your D&D game as a warm-up for our new sourcebook Heretic’s Guide to Devotion & Divinity.

If you want to quickly navigate to a specific tip, you can click on any of the bullet points below: 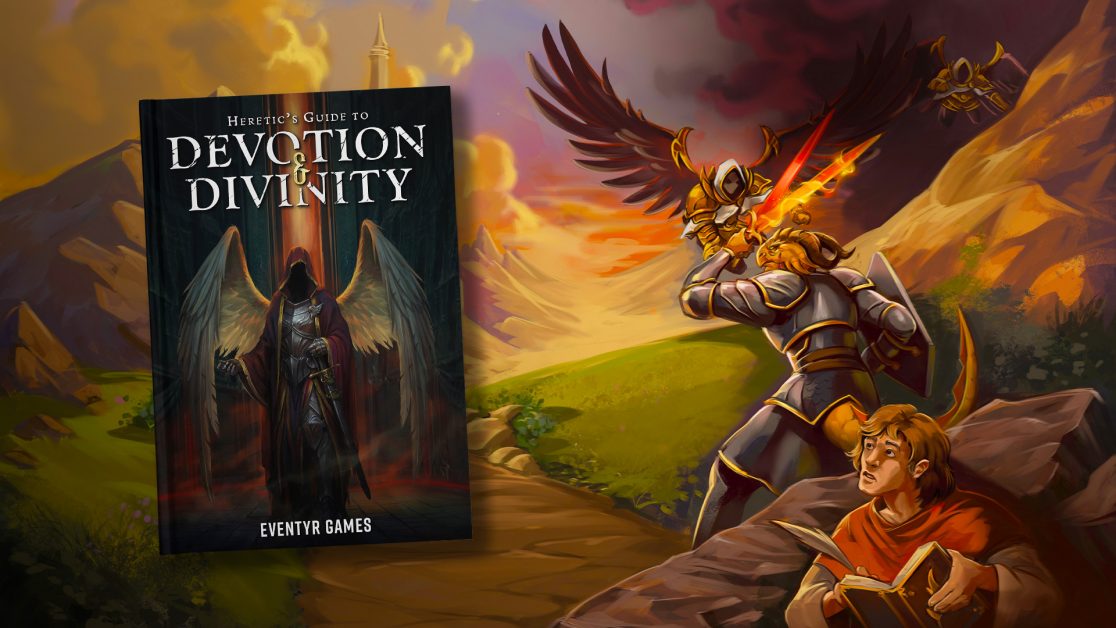 Looking for divine inspiration? With 152+ pages of divinely themed content, Heretic’s Guide to Devotion & Divinity got you covered. Click here to download a free 20-page sample.

1. Decide the Role of Gods & Religion

To make the divine an important part of your 5E game, your first decision should be what role you want gods, celestials, and religion to have in your setting.

Who are the gods? In the official D&D cosmology, we have a single unified pantheon of gods portrayed as powerful beings who interfere in the affairs of mortals. However, it’s entirely up to you whether you want a single or ten gods of sun or lightning and thunder – and whether any of these are capable of manifesting physically on the Material Plane or must enact their will through divine agents if they even care about the affairs of mortals in the first place.

What about religion? Next in line is the role of religion. If the existence of gods is an indisputable fact, atheists are likely few and far between – and probably regarded as semi-lunatics. That said, you’ll still need to decide what part religion plays in society and the life of common folk. Here are a few things to consider:

So, with that religious foundation laid, let’s dive into the tips and tools to make it all matter!

One way to make religion feel like a natural part of your fantasy setting is to weave religious practices into your setting as a sort of fabric of daily life for the common folk. Having the characters continually hear sayings and religious superstitions or be part of public sacrifices or religious festivals will go a long way toward making the divine a cool part of your world!

Marks of Worship. Every culture and every religion has various beliefs and superstitions, many of which are rooted in religion – just take the good ol’ example of ‘knocking on wood’ which is said to stem from the ancient pagan belief that spirits and gods reside in trees. Most often, we take these marks of worship or superstition for granted and do them without thinking, even if they may seem strange to others. Take inspiration from this, dial it up a notch, and use it in your D&D game as you litter your world with marks of worship – after all, forgetting to toss a coin into Lady Luck’s pond is a much worse sin in a fantasy world where the Lady in question is very real.

A quick Google search on African and South American tribes as well as old Norse tribes can also be a great source of inspiration for various interesting religious and spiritual practices!

3. Integrate Religion into the Power System 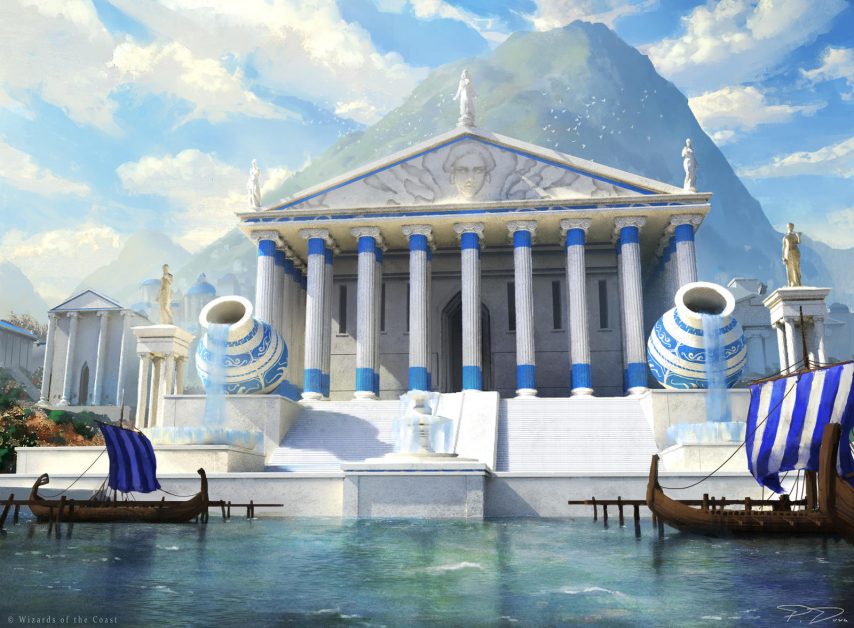 A religious organization doesn’t run itself, so if you make religion a public matter (which you should!), you need to think about who’s paying for the temples, all the cool ceremonies, and sacred services – such as a character resurrection! Whether a religious organization is all about charity, knowledge, or spreading the word of the world’s imminent doom, there’s also the question of how they fund their goals, who makes the decisions, and so on.

You don’t have to flesh out every religious organization, but if you want one or more religions to be embedded into the state apparatus, you need to give some thought to how the religion is organized.

Of course, I’d suggest you do this as a state controlled by a single religion with its rules and dogma, or a state-run religion. These are just great ways of making religion impactful in your game! 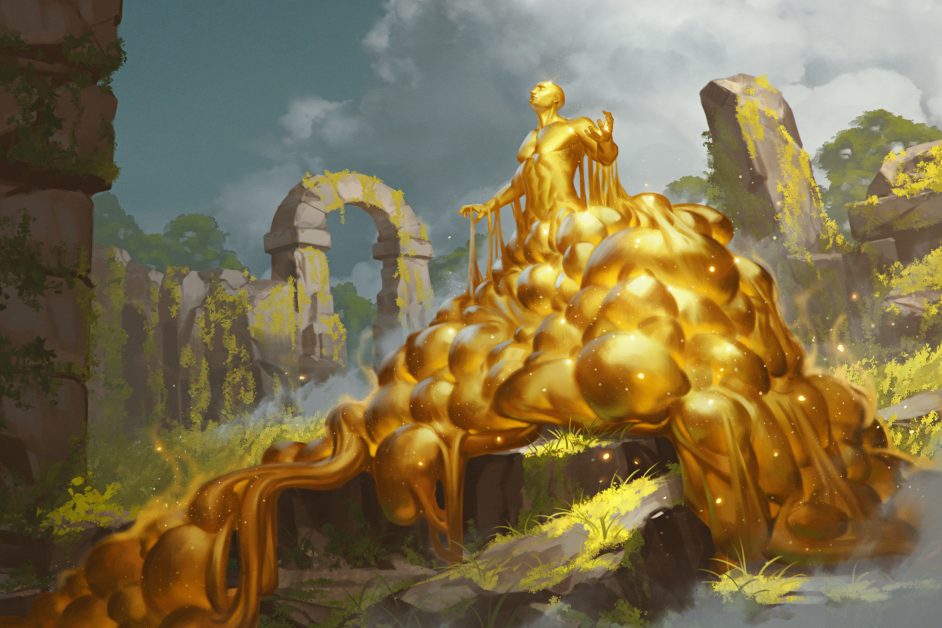 The Godblood Ooze is one of 30+ divine monsters in Heretic’s Guide to Devotion & Divinity.

Powerful priests, all-knowing oracles, and guiding angels. Using agents of the divine as plot tools in your game is a fun and easy way to make the divine aspect of 5E play a role.

The same goes for having the party fight celestial foes and other seraphic horrors. Unfortunately, the 5E Monster Manual contains just 7 celestial creatures – most of which are creatures such as unicorns and angels that the heroes won’t really have a reason to fight in the first place.

This means you’ll have to come up with new monsters yourself. In our upcoming sourcebook Heretic’s Guide to Devotion & Divinity, we’re providing more than 30 unique monsters with divine powers – such as the soulsplinter sprite and godblood ooze – that you can easily drop into any game.

Another way to come up with cool celestial foes is to take the statblock of existing angels and give them a dark twist, as we’ve done with the forsaken deva.

All of these divine foes are featured in Heretic’s Guide to Devotion & Divinity (alongside many more) and can be found in this free 20-page sample of the book.

No matter what, having the party encounter a twisted celestial being is bound to make for some intriguing encounters for the players – and have them respect the powers of the divine! 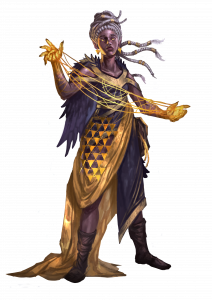 So, this may sound like a no-brainer, but since we’re talking about religion in a fantasy setting where gods and magic are real, you should really crank up the cool factor when you describe temples and other holy sites to the players.

Make it feel fantastical – from an angelic choir so beautiful those who hear it become blessed for a week to a charismatic priest preaching peace with her booming voice to calm the emotions of a rioting crowd, you want the divine to feel extraordinary.

Don’t worry about the mechanics here. As DM, you have the gods’ blessing (and power) to go far beyond the spells and magic that the players already know!

6. Have the Divine Impact the Characters 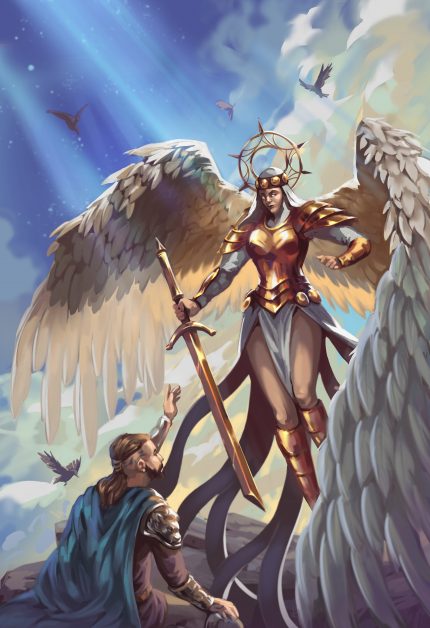 Religion should have an impact not just on the characters’ surroundings but also on themselves. We’ll get to clerics and paladins specifically later in this, but there are a number of cool ways you can make religion matter just a bit more for any character.

For example, you can have the characters be blessed at a shrine or have some religious figure sanctify the characters or offer auguries, advice, or even bring back a fallen comrade! Likewise, a religious organization might also approach the characters for help. Ideally, you can try to match these encounters with organizations that dedicate themselves to one or more of the characters’ favorite god(s) – which is also why you should take note of each of the party members’ beliefs, even if a character doesn’t worship a specific god per se.

Another great way to make sure a set of tenets or a religious code means something to a character is to introduce sacred oaths that a character can forge with a divine entity to gain a blessing in exchange for vowing to perform (or not perform) a particular task.

For example, Heretic’s Guide to Devotion & Divinity introduces Divine Oaths that the characters can forge with their deities. See the image below for a few examples: 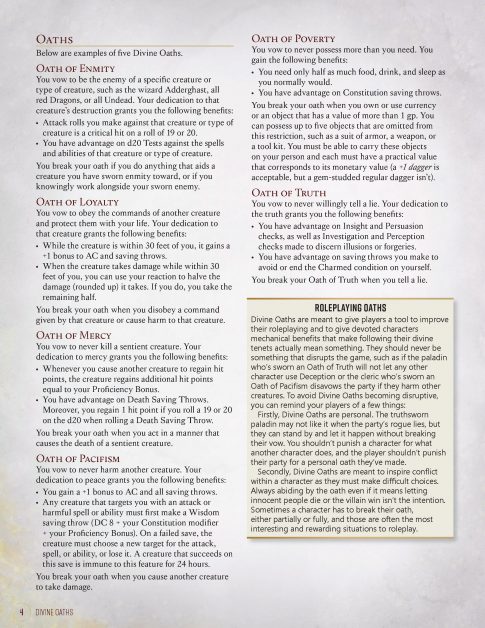 Another way to make the divine feel important is to reward the players for their religious roleplay! If the party’s barbarian decides to make a sacrifice to the god of war before a battle, why not give the barbarian or the entire party a +1 bonus to attack rolls during the next combat? Or if the party takes time to have a burial ceremony for a fallen comrade with the cleric praying for a safe journey to the God of Death as the bard plays a sad tune on their harp, why not reward the party with the benefits of a bless spell for the next 24 hours?

Likewise, you should also help your players understand how they can use religion to define their character. Most of the time, we tend to forget that you don’t have to be a cleric or paladin to be a practitioner – and you don’t have to only show love for a single god either.

For a player to be able to integrate religious belief into their character, they’d also need to have a grasp on the role of gods and religions play in your setting, and how faith is (typically) practiced across society as a whole.

8. Decide How Clerics & Paladins Get Spells

Clerics and paladins are the only classes to which gods and religion are described to play an integral role as a baseline – and this makes the party’s devout practitioner an ideal starting point for you to flesh out the importance of gods and faith in your setting.

Aside from a set of tenets from a sacred oath, and a bunch of awesome divine powers, the core rules don’t, however, make it entirely clear how a paladin or cleric’s relationship with their god (or gods) works in the first place – which is a shame, as the whole idea of being bound to a god’s ideals kind of falls to the floor when you can’t explain what it means.

So, here are a few pointers that you can share with the party’s spiritual front figure:

It is perhaps the most obvious advice, but cults & zealous sects with a twisted dedication to a god or set of religious ideals are great tools to make religion play an important role in your plot. For example, if you’re struggling to come up with a reason for the villain’s crazy plans – and the villain isn’t a demon or undead who’s just evil by nature – religious fanatism is a surprisingly effective tool to make it authentic and plausible.

There’s s reason a cliché became a cliché in the first place – it’s because it works!

So, don’t hold back on using good ol’ tricks that are easy to implement such as dream visions where a god’s representative contacts one of the characters in a dream and points them somewhere or warns them of something.

Just because you’ve read something similar happening in another D&D game somewhere else on the planet, or seen something cool in a movie, a good idea is a good idea, and you should use whatever inspiration you think would make a cool attribution to your 5E D&D game!

So that concludes our top 10 tips for making gods & religion play a more important role in your 5E game. Of course, there are many other ways you can expand on the divine aspects of your setting, but once you decide on the overall questions outlined in this article, it becomes a lot easier to make the divine a fun part of your setting!

If you found the article interesting, check out Heretic’s Guide to Devotion & Divinity which is launching on Kickstarter 1st of November. 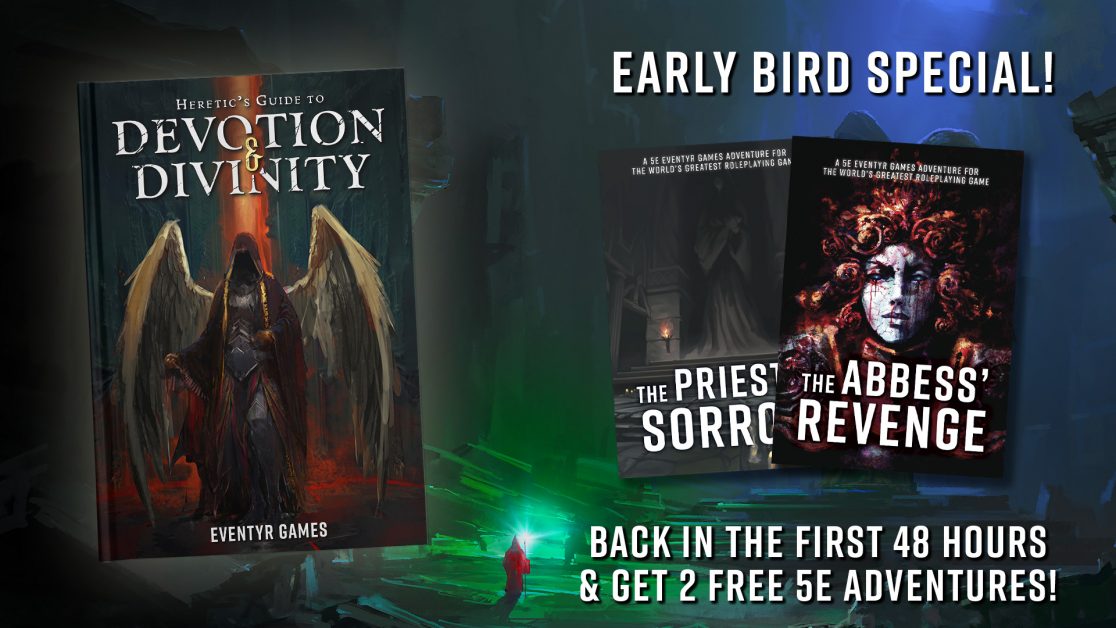 Check out Heretic’s Guide to Devotion & Divinity on Kickstarter!