Vampires are one of the most famous elements of fantasy folklore, and in a fantasy game like 5E D&D, it’s only natural that some players would want to play a vampire character. Going by the official rules, however, having a character become a vampire is more than troublesome.

This article will give you all the tools you need as a DM to facilitate a player character becoming a vampire without breaking the balance of the game, changing their alignment, and having the player eat the rest of the party!

First, I’ll go over what vampirism is and how it works before presenting a rework of vampirism that’ll allow characters to play as vampires in D&D 5E without becoming immortal monsters!

Milando’s Guide to Magical Marvels provides more than 150 pages of magical content – including balanced reworks for lycanthropy, vampirism, and lichdom!

What Is Vampirism and how does it work?

We’ve all seen the Twilli… I mean, read Bram Stoker’s Dracula novel, so obviously we all know what a vampire is: A deceitfully charming creature that drinks the blood of the living.

In 5E D&D, it’s a bit more tricky. Unlike lycanthropy, vampirism isn’t a curse per se. Don’t ask me why, but it may have something to with avoiding a vampire being reduced to an aging commoner with a remove curse spell (which would’ve kind of ruined the plot of Curse of Strahd).

Neither curse nor disease, vampirism is a terrible dark transformation that turns a creature who has been bitten by a vampire into an undead abomination. 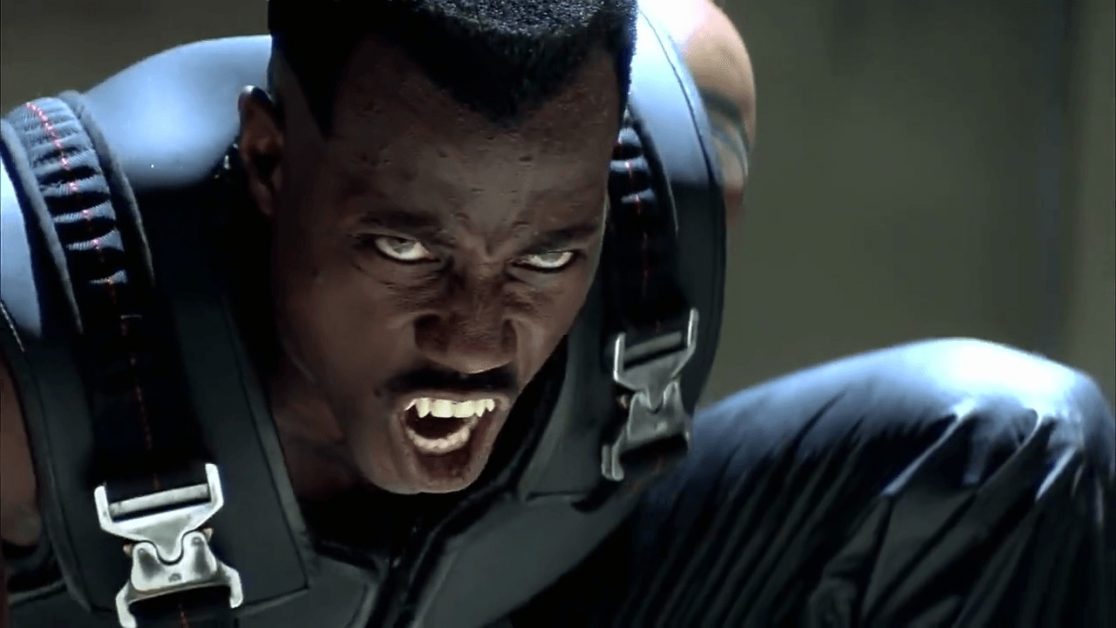 It’s only natural players would want their character to be a vampire – or at least half!

So what does that mean for a player wanting to become a vampire? Well, according to the Monster’s Manual, a character bitten by a vampire becomes a near-mindless vampire spawn beholden to their vampiric master (the DM) and basically loses control over their character. Doesn’t sound like a lot of fun to the would-be-vampire character.

There is one other option though: If a vampire spawn drinks blood from a true vampire, it transforms into a vampire and retains its own free will! Yay!

However, this would effectively change a character into a Challenge Rating 13 vampire, and although this may not ruin a high-level campaign, having such a strong character running around and feasting on everyone else’s blood is a stake to the heart (pun intended) to almost any campaign.

Unless, of course, you decide to rework how vampirism works. Which you should, in case you plan to allow a character to become a vampire. So how do you do that? 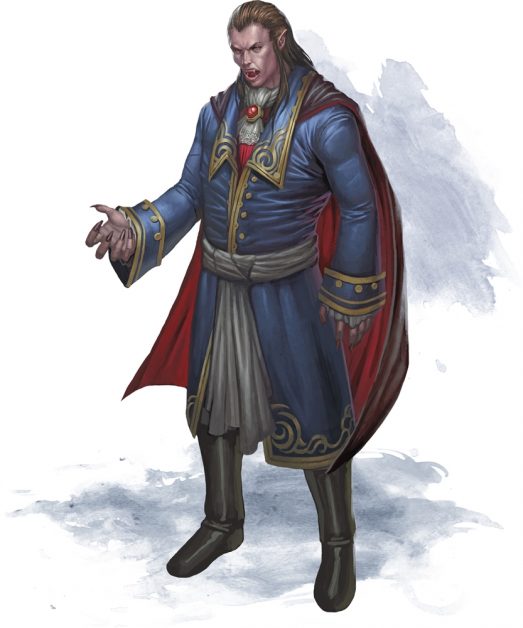 A Rework of vampirism for player characters

In Milando’s Guide to Magical Marvels you’ll find comprehensive guidelines to handle many dark transformations – from attaining lichdom to becoming a lycanthrope or a vampire – but for the quick fix, there are just two things you need to consider:

If a character just wants a small taste of a vampire’s prowess, you could also just check out the dhampir lineage featured in Van Richten’s Guide to Ravenloft which works as a substitute for racial benefits.

For the true vampire experience, however, you’ll need to do a little more tweaking – and the keyword here is balance. You want to strike a fine line between the benefits and drawbacks of being a vampire to make it feel authentic, useful, and yet not over-powered.

The path to becoming a vampire featured in Milando’s Guide to Magical Marvels is designed around numerous flaws and benefits that change as your vampiric powers grow – the more you embrace your vampiric affliction, the more benefits and drawbacks you unlock.

These flaws and benefits are represented by Vampirism feats you can take when you gain Ability Score Increases – which also means that you’ll miss out on feats or ASI’s in order to gain vampiric powers, thus making it much more balanced and fun for everyone at the table! 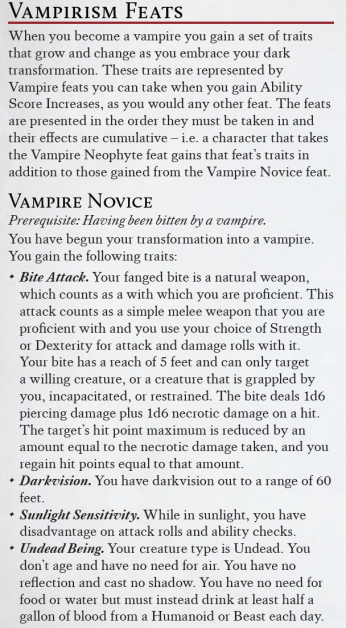 Even a true vampire starts out as a novice! Snippet from Milando’s Guide to Magical Marvels.

After being bitten by a vampire and choosing the “Vampire Novice” feat from Milando’s Guide to Magical Marvels, you can pick up the “Vampire Neophyte” feat followed by “Vampire Scion” to unlock new vampiric powers – and ultimately you can get the “Vampire” feat to become a true vampire!

This will grant you the ultimate powers of a vampire (redesigned to be balanced for player characters), but it also comes at a cost, as every step on the path of vampirism also presents new weaknesses. 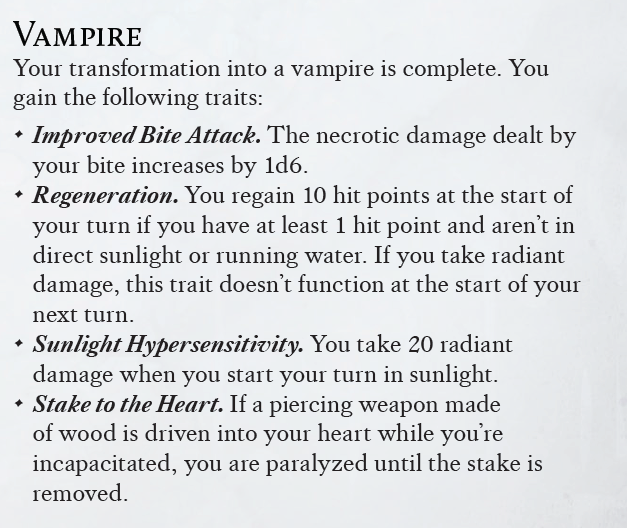 Only a true vampire is prone to a stake to the heart! Is the vampire’s regeneration worth the cost? Snippet from Milando’s Guide to Magical Marvels.

Vampirism is awesome – and it’s no wonder many players would want their character to be a vampire, or at least have vampiric traits with a boot in both camps. However, going by the 5E rules for vampirism, that’s pretty much a recipe for disaster as it’ll either turn a player into a brainless vampire spawn or an overpowered fully-fledged vampire.

The alternative? Well, unless a player is satisfied with just a small taste of vampirism through the Dhampir lineage in Van Richten’s Guide to Ravenloft, you need to rework how vampirism works!

While there are numerous ways to arrive at that goal, the key lies in balancing the benefits and drawbacks. You don’t want vampirism to be so powerful that it’ll ruin the balance of your game with inconsequential drawbacks, but you don’t want to make it feel too weak either.

In Milando’s Guide to Magical Marvels, we’re providing a full rework of vampirism for player characters, as well as lichdom and lycanthropy, and as outlined in this article, our design philosophy is to combine powers and drawbacks and have both grow in intensity as you embrace your affliction.

Because you have to pick up your vampirism through feats, it means you’ll have to pass on ASI’s or other cool feats – thus making it much more balanced – and at the same time, making it a more conscient choice to embrace your dark affliction makes it feel much more authentic!

I think that pretty much covers our thoughts on reworking vampirism in 5E. Remember to check out Milando’s Guide to Magical Marvels for the full remake of vampirism, lycanthropy, and lichdom – alongside 150 pages of amazing content rooted in curses, wild magic, and other cool concepts. 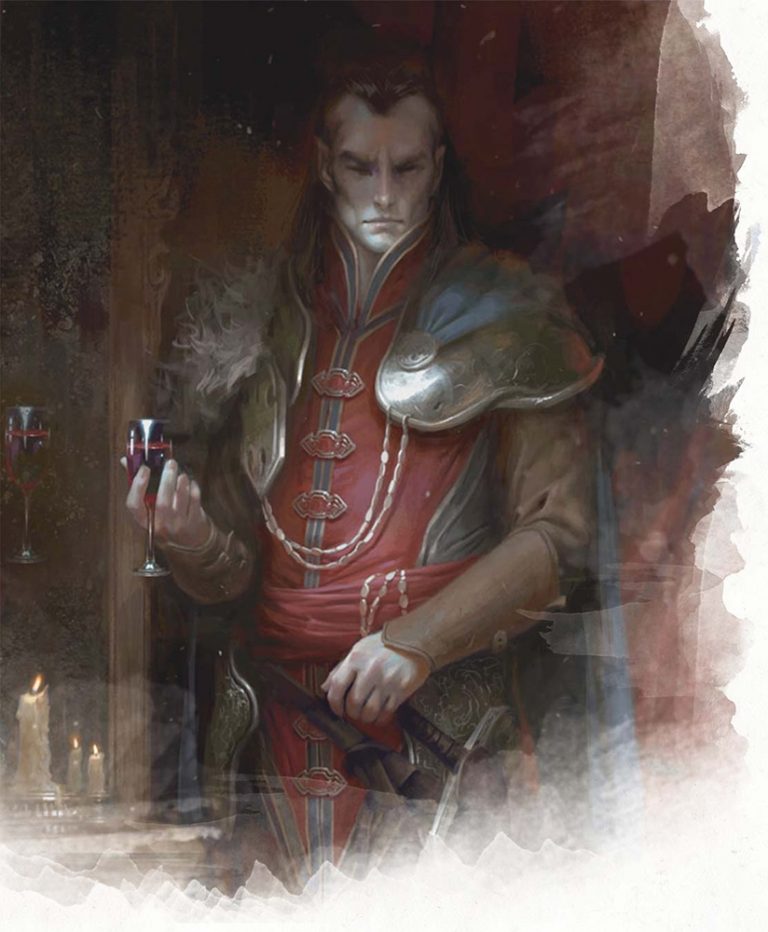