Critical Role: Call of the Netherdeep is an epic adventure for 5E Dungeons & Dragons – and like any other published adventure, it’s not without flaws.

In this article, and future articles in this series, we’ll be diving into Critical Role: Call of the Netherdeep, offering advice on how to run it, suggestions on what to add or change, and providing additional resources as they’re needed.

If you’re familiar with our work, we’ve been publishing best-selling guides for 5E published adventures over at the DMs Guild. However long it ends up being, this series will be entirely free, hosted here on eventyrgames.com and as videos on our YouTube channel. If you want to support that, get early access, and more, consider becoming a patron at patreon.com/eventyr.

Without further ado, let’s dive into Critical Role: Call of the Netherdeep with a look at what you’ll want to know before starting the adventure!

Prefer videos? Check out the video version of this article here.

What is Call of the Netherdeep about?

The first thing you need to know when running Call of the Netherdeep is, quite simply, what is it about?

At its core, Call of the Netherdeep is a quest to save a trapped and corrupted entity from its eldritch prison. The characters stumble upon this quest as they find an ancient artifact called the jewel of the three prayers. Their search will take them to three different cities on two continents before they can release, defeat, or redeem this trapped entity, the Apotheon, in a submerged prison under the city of Ank’harel.

Call of the Netherdeep has a very extensive Story Overview (p. 6-8) that explains the background of the adventure, so we won’t delve too deeply into that. There are two elements it is worth noting, however:

Each warrants an article of its own, so we won’t go too much into them here, but you should be aware of them when you begin the adventure.

Even though the introductory chapter has a lot of helpful information, it is woefully short on two points: structure and hooks – which is what we’ll be diving into now! 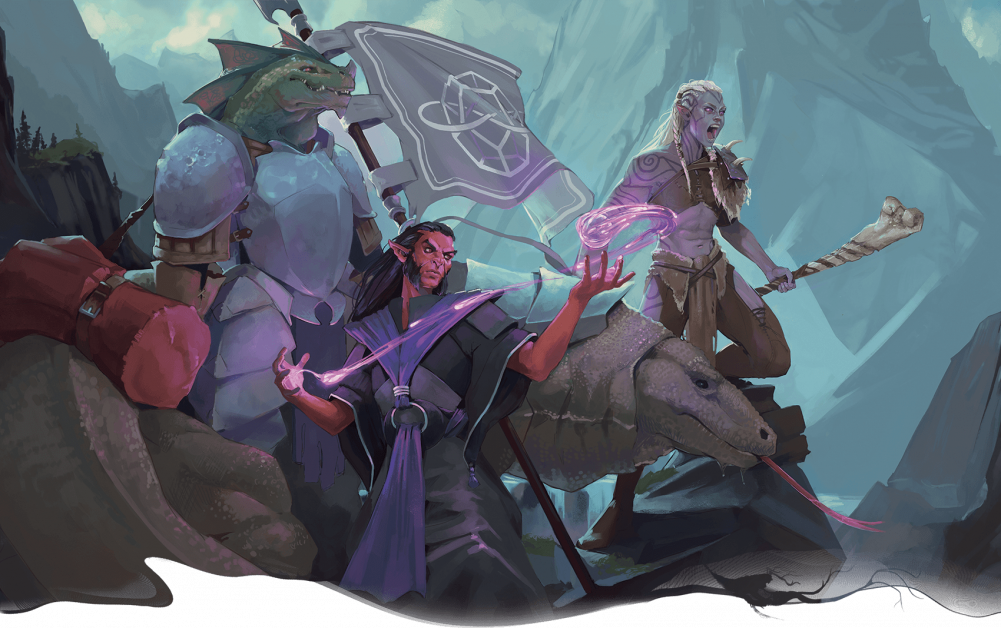 Call of the Netherdeep – Structure

When you’re sitting down to run an adventure, it’s hugely helpful to know how the adventure is expected to play out. It gives you a sense of confidence knowing what might happen and allows you to understand better when and what you can improvise. Thus, it is always frustrating when an adventure’s introduction doesn’t give us that.

Because while Call of the Netherdeep provides a flowchart (p. 9) that tells us where and what is happening, we don’t know a lot about the why and how. And without that, we don’t have a structure; we have a travel itinerary.

So, to give you a better understanding of the adventure – and to spare you from having to read the whole adventure in-depth before running the first session – here’s a more thorough synopsis of the adventure’s story and structure:

Chapter 1: A Fateful Competition has the characters starting in Jigow, where they participate in the Festival of Merit (or so the book assumes, more on that later). At the end of the Festival, they are handpicked to dive into the Emerald Grotto, where they find the Jewel of Three Prayers and receive a vision from the Apotheon, who beseeches them for aid.

Chapter 2: The Leave-Taking (most likely) begins with Elder Ushru seeking out the characters, explaining that he had a vision of his own from the Apotheon, and asking them what happened in the dungeon. If the characters tell him what happened, he implores them to go to the city of Bazzoxan to learn more. The rest of the chapter deals with their journey there.

Chapter 3: Bazzoxan has the characters exploring Bazzoxan and speaking with various NPCs representing different factions. Eventually, they’ll find themselves at the Betrayer’s Rise, a dark temple from which demons attack the town. Within, the Jewel of Three Prayers is awakened, and they have another vision. The jewel is either stolen and taken to Ank’Harel, or friendly NPCs steer the characters toward Ank’Harel. The characters gain the means to teleport there.

Chapter 4: The Jewel of Hope has the characters arriving in Ank’Harel, where they get entangled with one of three factions. Through various faction quests in the city, they learn more about Ruidium and the Netherdeep and are eventually called upon to enter Cael Morrow, where the Netherdeep ostensibly resides.

Chapter 5: The Drowned City has the characters exploring the sunken city of Cael Morrow. Here they can bring the Jewel of Three Prayers to its exalted state and gain another vision from the Apotheon. Finally, they find a portal that takes them to the otherworldly Netherdeep.

Chapter 6: The Netherdeep has the characters venturing into the Netherdeep. Here they are assailed by challenges wrought by the Apotheon’s damaged psyche. In the end, they’ll find their way to the Heart of Despair, the Apotheon’s inner sanctum.

Chapter 7: The Heart of the Despair is where the characters must confront the Apotheon and either free him, destroy him, or redeem him to conclude the adventure. How the adventure ends will, in large part, depend upon their actions here!

Call of the Netherdeep – Railroad or Sandbox?

While this structure looks fairly linear, and is fairly linear, in terms of physical locations (going from Jigow -> Bazzoxan -> Ank’harel -> Cael Morrow -> the Netherdeep), there is a lot of room for player agency along the way.

Most notably, the player characters’ interactions with their rivals color a lot of the events in the adventure and can have a significant impact on how various conflicts are resolved. In addition, which faction the characters choose to work with and how they do so is also significant and may lead to different outcomes. Finally, how the characters decide to deal with the Apotheon has a big impact on how the adventure ends.

Personally, I think this makes for a compelling structure, even if a few more “optional” locations would have been welcome. In the end, crafting a good, cohesive story in a 200-page adventure is incredibly difficult if you have to account for a multitude of different paths and locations.

What I do have an issue with, however, is the lack of emphasis on hooking the players in. This is often an issue with published 5E adventures, and Call of the Netherdeep is no exception. So that’s what we’ll be taking a look at now.

Call of the Netherdeep – Hook

The hook is where we get the characters involved in the adventure – i.e. make sure that they actually go on the adventure. In Call of the Netherdeep, the hook only works if all of the following is true:

Those are some pretty big ifs. Now, if you have an accommodating party, it might not be an issue. But, if your players are a pack of contrarians, it’d be quite simple for them to mess this up:

“Nah, I don’t wanna participate in the festival. Where can I get an ale?”

“Ugh, this maze-thing is hard. I give up. I’ll never get a medal. Is the festival over yet?”

“Eh, so why would we go to this Bassossano-or-whatever place? Because of some dumb vision? Meh, I’d much rather try that pie-eating contest again. Or open a pie shop!”

There are some steps you can take to make it more likely that these won’t hooks won’t be issues that’ll have to be clumsily fixed halfway through.

First, when the players are creating characters, tell them that they’ll be starting at the Festival of Merit and explicitly ask them why their characters are interested in participating in the festival. Because they really should be interested.

Second, prepare for the – quite likely – scenario that the characters aren’t all that successful at the Festival of Merit. If they didn’t gather a ton of medals, have the elders cast augury or a similar divination spell to let the gods themselves decide which among the festival participants are worthy!

Third, entice the characters not just with cryptic comments and half-baked visions but promises of wealth and power. The elder who approaches them at the beginning of Chapter 2 can emphasize that the jewel of three prayers will grow in power and become a very valuable magic treasure – or even offer a reward if the characters investigate the visions further.

These aren’t big changes – and you may not need to implement them at all – but having just thought about it avoids an awkward first session where you have to figure out how to get the characters to bite and go on the adventure.

And with that, we wrap up this initial post on Critical Role: Call of the Netherdeep. Just a little primer to get us started. We hope to cover more Call of the Netherdeep in the future – including a step-by-step walkthrough of the adventure. Stay tuned for that by subscribing to our YouTube Channel and signing up for the Eventyr Games Newsletter.

Oh, yeah, and another shout out for our Patreon. We have a fantastic community over there and would love to have you – so if you have a dollar to spare to support what we do, please check out patreon.com/eventyr 🙂