With the remove curse spell as the starting point, this article dives into the problems with curses in 5E – and provides the DM with tools to improve curses in 5E and give accursed boons, cursed items, and hexes the spotlight they deserve in your campaign with an easy fix!

Let’s first look at why curses don’t work in 5E before going into how to fix curses in 5E D&D! 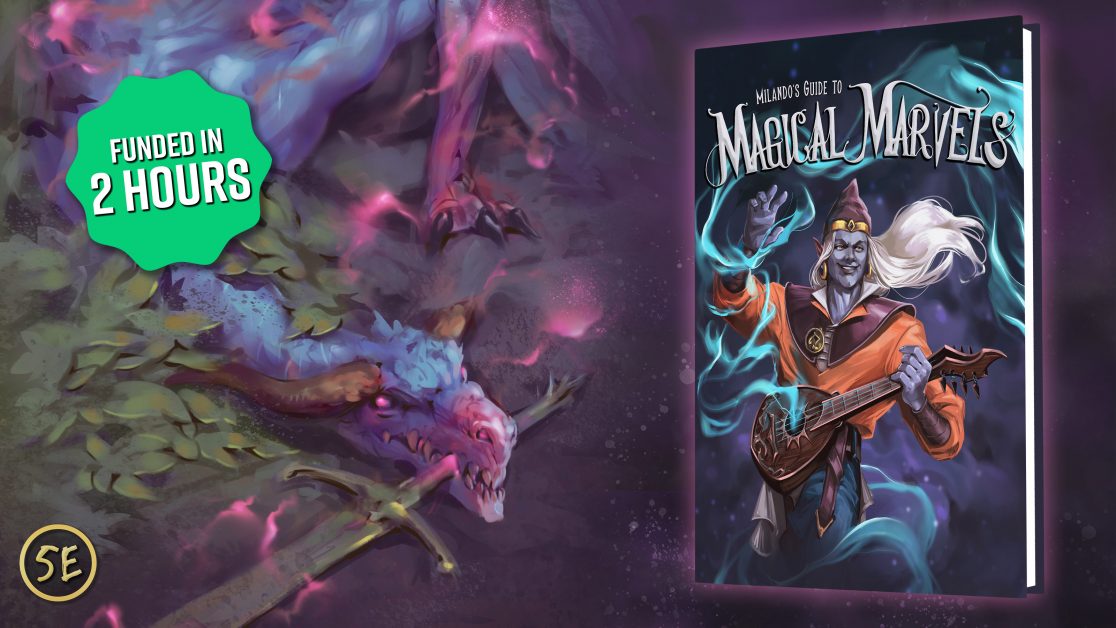 Milando’s Guide to Magical Marvels introduces new rules & guidelines on how to handle curses, including cursed magic items and 20+ hexes and accursed boons!

The Sleeping Beauty? Pirates of the Caribbean? From the Nightwatcher in Brandon Sanderson’s The Stormlight Archive to the werewolf-bitten darks arts teacher Remus Lupin in the Harry Potter-series, curses have always played a defining role in the fantasy genre.

You don’t have to look further than Tolkien to realize how much epic drama an evil ring can cause!

In 5E, however, that’s far from the case. Any DM who’s had a character don a cursed armor or suffer a werewolf’s bite knows how underwhelming and underdeveloped curses can feel in 5E.

And how could it be otherwise when a curse can simply be cured with the remove curse spell – a 3rd-level spell that requires no material components and removes “all curses affecting one creature or object”.

The spell even makes cursed magic items redundant as the spell can break the owner’s attunement to a cursed item – and because most cursed items have more detriments than bonuses, any sane character would just stop wearing the cursed item they’ve attuned to once they hit level 5 and can cast 3rd-level spells.

While this would’ve been a handy tool for the fellowship in The Lord of the Rings – I’m assuming Gandalf would know the spell! – it would’ve also ruined the entire plot of the trilogy. And that highlights my point.

Curses are an amazing tool to drive a plot and create a meaningful motivation for the characters; something every adventurer needs to make their D&D experience exciting – but that tool is sent right down the drain when curses can be removed with a simple spell.

Milando’s Guide to Magical Marvels opens up to a world of dark mysteries with new curses, jinxes, and accursed boons weaved by mysterious hexcrafters!

Curses should, in my opinion, be fun, defining, and not easily removed – and they shouldn’t be too detrimental (nor too beneficial) to the cursed character. Though curses in 5E don’t really live up to any of those criteria, that can be fixed!

Change How Curses are Removed

Changing how curses are removed is something that’s addressed in-depth in Milando’s Guide to Magical Marvels, but the easiest fix to implement if you want to make curses matter in 5E, is to simply get rid of remove curse or change it into a spell that can suppress curses instead.

Greater restoration does what remove curse does anyway, but at least it’s a 5th-level spell that costs 100 gp, so a lower-level party may still need to venture out on a quest to find someone who’s able to cast it for them – making any curse more relevant and deadly.

And, if you really want to spice things up, you could have these spells require a check to be successful, in a similar fashion to dispel magic, depending on what kind of curse we’re talking about, and what level the party is!

When you make curses harder to remove, you should also consider making them easier to cope with. That means tweaking how each curse inflicted by monsters works.

There are no real rules for handling curses in the 5E core rules (besides the framework established by the spells remove curse and bestow curse), but plenty of monsters can inflict curses.

Unfortunately, the most common traits shared by these curses are that they are too deadly yet too easily removed which makes them both boring and not in any way defining for the story!

Take the mummy’s Mummy Rot as an example. As written, the cursed target becomes unable to regain hit points and its hit point maximum decreases by 10 every 24 hours. Pretty harsh, not very fun.

But if you change the curse so the character is just unable to receive magical healing and lose 1 hit point maximum every 24 hours, it’s suddenly a lot more playable – and should still give the cursed character plenty of motivation to find a cure without dying after just a few days. Not all dark transformations are curses… Milando’s Guide to Magical Marvels provides tools for player characters to attain lichdom without breaking the game!

Does the rhakshasa’s claw really need to make the target completely unable to gain the benefit of both short and long rests as they’re haunted by horrible dreams? Instead, you can allow the character to make a DC 10 or even DC 5 Wisdom saving throw every time they attempt to take a long rest – and then have the DC increase by 1 each time they fail!

Instead of having the deformities inflicted by fomorians suddenly disappear when the cursed character succeeds on a saving throw, wouldn’t it be more fun if the effects were somewhat permanent but less detrimental?

Perhaps the cursed character doesn’t need to have its speed halved but must succeed on a dexterity check every time they attempt to dash – and have disadvantage on ability checks based on Strength or Dexterity but not attack rolls and saving throws.

You could also choose that the curse’s effect gradually gets worse unless delayed with a lesser restoration or a paladin’s Lay on Hands and removing it entirely can only be done with a greater restoration and a successful DC 20 ability check using your spellcasting ability – or that the PCs need to seek out an exciting NPC to have the curse removed.

The idea here is to make the curses inflicted by monsters harder to remove but easier to cope with for the character – and thereby making them much more fun!

Lycanthropy might be the exception to this rule, but this curse has such an array of issues in its own right that we’re giving it a complete makeover in Milando’s Guide to Magical Marvels – and is also something we’ll cover in an upcoming article!

Cursed magic items are another story.

As per the rules, a character can break their attunement to any cursed magic item with a remove curse spell – the hand of vecna is literally the only exception, and that’s only because removing the artifact kills you!

Even so, cursed items could be great, if the items were fun. However, the detriments of most cursed magic items far outweigh their bonuses. Why would a character wear an armor of vulnerability that gives resistance to one damage type, if the cost is vulnerability to two other types?

In Milando’s Guide to Magical Marvels, we supply the DM with a trove of double-edged boons and cursed magic items – with the key ingredient being the give-and-take relationship that makes the darker aspects of magic interesting in so much fantasy literature.

To give you an example: If the wish-granting monkey’s paw in W. W. Jacobs’ short story The Monkey’s Paw didn’t come with a terrible cost for interfering with fate, it might as well have been a magical lamp – and wouldn’t have been anything new.

If you wanted to introduce a demon’s finger that worked like the ol’ rabbit’s foot for good luck, you might as well give your player character a stone of good luck. But if you twist it by allowing the DM to force a player character to reroll one of their rolls after they’ve used the magic items lucky feature a couple of times, you suddenly have something that is a lot more interesting!

Introduce Curses that can’t be Removed by Magic

Finally, there are also types of curses that you may get from defiling a sealed tomb, desecrating a sacred temple, or killing someone backed by a powerful demon or deity.

The kind of curse you don’t want to be removed by any spell aside from wish, where magic should only offer temporary respite, and the cure is restitution to the wronged party or something else that drives the plot forward!

Van Richten’s Guide to Ravenloft introduces the first official guidelines for these kinds of curses – and despite the suggested ‘burdens’ being rather bland and the broad guidelines on how to remove them such as “research and divination can offer clues” not giving the DM a lot to work with, I have to applaud WotC for finally trying!

Using this type of curse gives the DM an incredibly powerful tool to guide the adventure while the characters get a meaningful incentive to do a specific quest as a way of finding a cure to the curse that has befallen them.

Need a stronger plot for The Wild Beyond the Witchlight? Well, let the cursed character learn that only the archfey Zybilna can cure their cruel curse! Need a reason for the party to end the everlasting winter in Icewind Dale: Rime of the Frostmaiden? Have a curse tie a character’s faith to it!

I love curses, dark magic, accursed boons, and everything in between – but as a DM it can be extremely hard to make curses the fun and meaningful plot device they deserve to be in 5E.

Just remember to consider the following as you attempt to make curses matter in your game:

I think that covers the basics when it comes to improving curses and using them as a fun tool in your own 5E game! If you want a more detailed rework on the rules for curses and new accursed boons, dark transformations, and cursed items, be sure to check out Milando’s Guide to Magical Marvels!