As a roleplaying game, there’s no more important character in D&D than the player character. There’s nothing that will make the game more immersive and exciting for the players than having “fun” characters – but what is a “fun” character and how do you make them?

This isn’t just a question for the players, because the best characters are created when the player and DM work together. Besides, making sure that the players have characters that are fun to play should be just as important to the DM, as it is to the players themselves.

So, in this article, I’ll be going over what I think makes D&D characters fun to roleplay and layout step-by-step directions to creating an exciting player character for D&D. This article will focus on the roleplaying aspect, but if there’s interest, I’ll cover the “rollplaying” aspect as well in a future article.

What is a fun character?

Let’s start by setting one thing straight: fun is subjective. What is fun for me, might not be fun for you, and vice versa. So when I’m talking about what’s “fun”, “interesting”, or “good”, I’m just talking about my own experiences and what I’ve seen my own players enjoy – i.e. what I think most D&D players find fun.

Alright, with that out of the way, here’s what I think are the most important characteristics of a fun character:

Below we’ll go over each of these in turn (or you can skip ahead to the summary if you’re in a hurry).

Background – Tie Your Character to the Game

It used to be that I would ask my players to write a backstory for their character, and they’d send me literal essays – pages and pages of descriptions of the characters’ early lives, including their parents’ names, descriptions, and occupations, and various other details that are very unlikely to ever come up at the table.

The issue is that players tend to focus on quantity over quality. The DM doesn’t need all the minutia and details – those get pretty hard to remember after a while anyway – they just need the highlights. The most important events that happened in the character’s life and made them who they are. Not what color dress their mother wore when their father proposed.

Most importantly, creating a background is about the DM and the player working together. The player should try to create small hooks the DM can grab onto and include in the campaign. The character’s long-missing sister who went off to become a wizard, the dragon that killed the character’s parents, or the fabled sword the character’s father always rambled about.

The DM can then – and should! – work to include these hooks in the campaign’s story. That may mean tinkering a little with the details (with the player’s consent) to make it fit – perhaps the sister is actually a half-sister, the dragon was red instead of black, or the sword was actually an axe.

The point is here that we want a background that the DM can work with. That includes ways for them to tie the character to the story and get them personally involved. Because while killing a dragon for its gold or to save the village may be enough motivation on its own, going after the dragon that slew your parents is just that much more motivating. And that brings us to the next point – motivation! 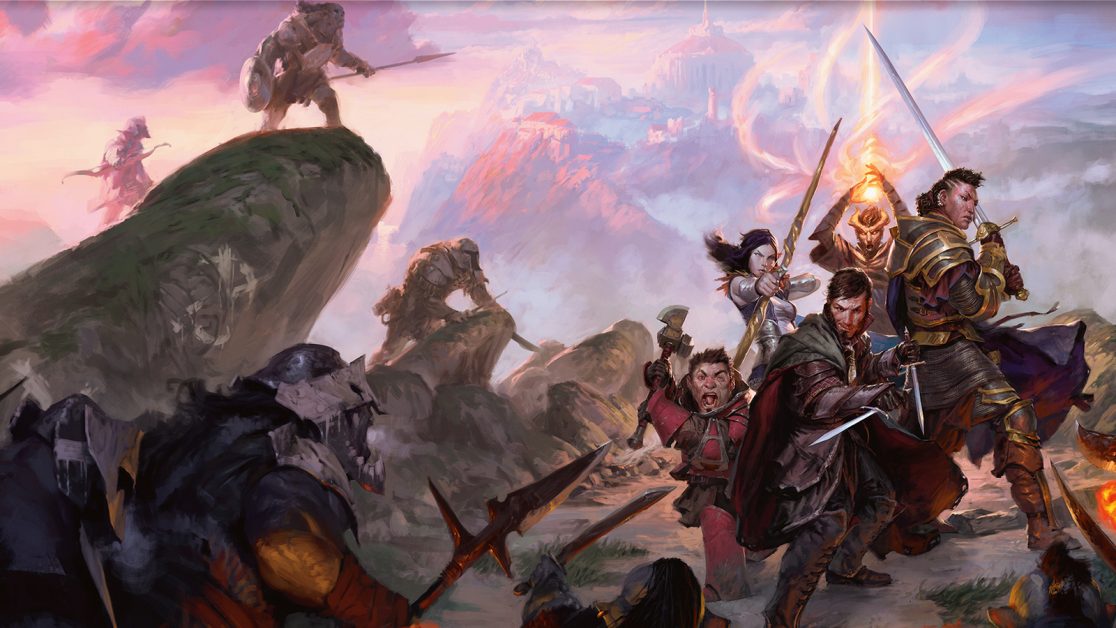 Any author or screenwriter will tell you that motivation is the key to a great character.

Having a firm idea of what the player character wants, both in the short and long term, is essential to creating a character that feels real and is fun and easy to roleplay.

Often, this is easier said than done. Motivation is hard to pin down. Just try to think about yourself – what’s your motivations? Your short-term goals? Your long-term, abstract goals? It isn’t easy – so here are some pointers.

At the core of any D&D character should be a long-term motivation that drives them to be an adventurer. If the player character doesn’t have a reason for being an adventurer, it’s not an adventurer at all, but just a glorified NPC.

When we think about these long-term goals, we tend to devolve down to single words or concepts such as “money”, “power”, or “excitement”. Those words don’t tell us a whole lot, though. To get a deeper understanding of the character, try to think about WHY they want these things.

Is the character focused on money, because they didn’t have any growing up? Then maybe it’s not really the money they’re after, but the security it provides or the adoration they believe comes with it?

Answering these questions is difficult, but the deeper you go, the better you’ll understand what truly motivates the character.

The character should also have more concrete, short-term goals – goals that can actually be resolved during the campaign. That could be figuring out what happened to their parents, killing the demon that slew their last adventuring party, or becoming a High Magus of the Circle of Mages.

These more immediate goals will help explain why the character is adventuring and, perhaps more importantly, give the DM something to work with. Something they can include in the story – as a quick sidequest or perhaps even an integral part of the larger story.

This brings us to the next facet of a fun character – making room for growth.

A character with an interesting backstory and clear motivation can easily be fun enough, but a truly great character also has room for growth and the possibility of change.

This means thinking about an arc for the character, something that will usually involve the DM and player working together. How could the character change and grow during the campaign? Knowing the character’s origin is one thing, but what could its “destination” look like?

Sometimes, this simply revolves around the short-term goal. The character’s arc begins with it being a lowly wizard’s apprentice and would end with it being a High Magus!

But growth can also be more personal – a change of attitude, beliefs, or ideals. A good way to set this up is to think about at least one thing the character believes about itself or the world, that isn’t true. Examples could be:

With the DM’s aid, the character may grow to realize that it can trust the other members of the party, that lying may be righteous if it can save the life of a hundred innocent people, or that elves aren’t the only folk with a unique and interesting history and culture.

Now, neither the DM nor the players are likely to be professional writers, so planning and successfully playing out an interesting arc for each character isn’t necessarily going to happen. Plus, D&D is filled with twists and turns. But just thinking about the character’s arc and discussing it will help bring the character to life and make it feel like a living, breathing person.

And, that coincidentally, is also what we’ll be looking at next: making the character unique and interesting with quirks, flaws, and mannerisms. 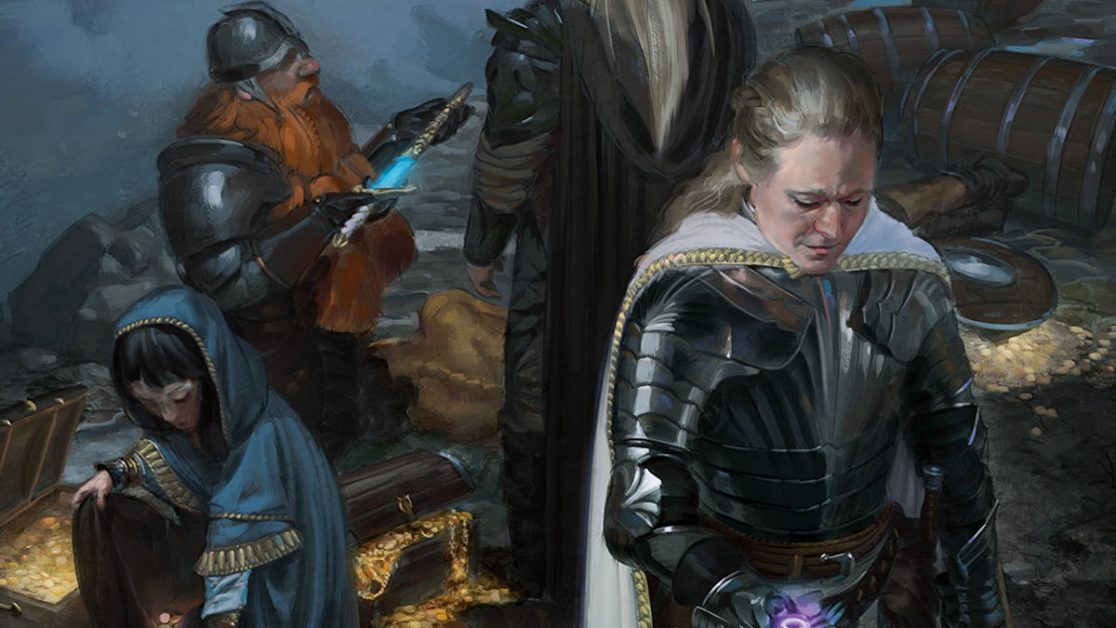 There’s a common misconception among newer players that each character needs to have a distinct – and often funny-sounding – voice. Luckily, they don’t – making your character feel unique and alive is about much more than just the sound of their voice (which is good, since we all can’t be professional voice actors!)

The goal is that everyone at the table will know when the character is talking – and that we, ourselves, feel like the character, when we’re roleplaying it.

Of course, that is something we can accomplish by giving the character a raspy voice or a deep, boisterous voice. But it can also be the rogue’s flat, deadpan gallows-humor or the wizard’s sesquipedalian speech (that means using too large or overcomplicated words, or so my thesaurus tells me!)

It doesn’t even have to be how the character sounds or speaks, it can also just be what it talks about – something that’s rooted in its personality. The rogue’s constant fixation on gold and distrust of others or the paladin’s constant mentioning of gods, creeds, and duty.

Whatever it is, you want it to be something, that sets you apart and defines the character, but also something that fits both your personality and your party – which brings us to the final point.

Even the most unique and interesting concept for a character can – and will – fall flat if it doesn’t fit. So, before you get too deep into your character, make sure that the character actually works for the player, the party, and the campaign.

The first and most important thing is that the player character actually fits the player. Let me give you an example. A while ago, I finally got to actually play in a game (I’m a forever-DM), so I sat down and created a character. I wanted to try something different, so I made the character youthful, naive, quiet, and courteous.

But when I sat down to actually play, it just didn’t work. I’m far too ADHD to stay quiet, I can’t help but make sarcastic and (in my opinion) clever quips, and I found it hard to pretend I didn’t mistrust any and all NPCs we met. In short, as much as I wanted to, the character just didn’t fit me. I didn’t have fun, because I constantly felt like I was either reigning myself in or playing against my character.

That doesn’t mean that players can’t play characters that are different from themselves. They absolutely can and should do so – that’s the most fun thing about roleplaying – but they also need to realize their limits.

No less importantly, the character also needs to fit the party. This one is pivotal because it will determine not only one player’s fun but the whole party’s fun. And, D&D is, in most cases, a communal game – we want to make it so that everyone is having fun.

If the rest of the party is composed of traditional heroes, the black-hearted assassin character may not be the best fit. Or, maybe there’s already another character that is very similar in the party, which would make it difficult to tell them apart.

The key here is communication. The players should talk with each other about their characters and try to see if their goals and motivations align – they don’t have to be identical, but they probably shouldn’t be diametrically opposed (“I want to protect all dragons” vs “I want to kill all dragons”, for example).

Of course, sometimes you fit in the best by being the odd-man-out. By being the one altruistic party member who keeps the murder-hobos in check, or by being the brash, door-smashing type, who gets things moving when the rest of the party becomes mired in planning.

Finally, the character needs to fit the adventure.

Likewise, if the adventure is about heroes saving the world at great personal risk and with little reward, it’s probably a good idea to create a character who’d go along with that.

It’s the player’s job to try and make sure, that they’re creating a character that fits the campaign – and the DM’s job to let them know if they aren’t.

So to summarize, here’s a quick checklist you may want to glance at when creating a D&D player character that is fun to roleplay:

If you follow these five steps, I can almost guarantee that you’ll end up with a character that’s fun to play. If there’s anything you think I missed, let me know in the comments below! 🙂