Starting out with the top 10 uncommon magic items, stepping up to the 20 best rare magic items, and then the 10 most amazing very rare items, we’ve reached our final destination in this mini-series: the legendary magic items of D&D 5e!

Prepare yourself to drool over some of the best magic items in D&D with our list of the top 10 legendary items in the Dungeon Master’s Guide and basic rules of 5e!

This greatsword is utterly insane. Besides giving a +3 bonus to attack and damage rolls (which is to be expected from a legendary weapon) this sentient bad boy has numerous abilities. While holding it you are aware of any creature with a soul within 60 feet of you, you can’t be charmed, you can’t be frightened, you can cast haste once per day. Thought that was it? Think again! The craziest ability the Blackrazor has is called Devour Soul and literally lets you devour the soul of any enemy (undead and constructs aside) you slay and convert it into temporary hit points equal to the slain creature’s maximum hit points. So, giving the last hit on a tarasque with this sword would give you 676 temporary hit points lasting 24 hours. Oh, did I mention that you have an advantage on all attack rolls, saving throws, and ability checks as long as you have any temporary hit points left?

The only caveat, which can be said about many of the legendary swords I’ve put on this list, is that the blackrazor requires attunement by a creature of non-lawful alignment, but since Wizards of the Coast is already pulling back on the whole black-and-white-alignment thing, I guess that’s a non-issue by now! 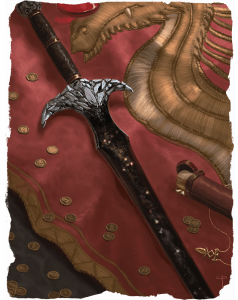 This weapon’s strength depends on the number of masters who’ve previously wielded it, which, according to the moonblade’s description, is typically 1d6 + 1 wielders.

If that’s a 6 on that dice, you could see the moonblade becoming a +3 weapon functioning as a defender, a ring of spell storing, and a vorpal sword, with room for another cool effect such as extra damage. That’s nothing less than crazy!

A minor detail for those of you with round ears: This beautiful masterpiece of a longsword can only be wielded by elves and half-elves of neutral good alignment. Sigh. 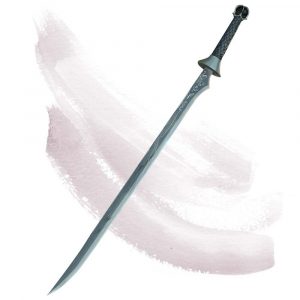 Wish is by far the most game-breaking spell in D&D 5e. About the only thing stopping a wizard from taking over the world with this spell – besides gods and other creatures with wish, of course – is that wishing for something other than the copy of a lower level spell takes a pretty heavy toll on you and comes with a 33 percent risk of never being able to cast it again! But what if you could wish for anything without having to worry about not being able to do so again, like, letting someone else deal with that annoying part of the spell?

Enters a ring of three wishes and a luck blade. Having a magic item that allows you to cast the wish spell – not just once but three times in the case of the ring! – makes these two items so powerful, that most DMs wish they didn’t exist! 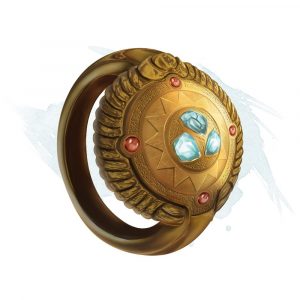 4. Tome of the Stilled Tongue

Okay, so this tome once belonged to Vecna, a not-so-friendly godlike lich, and it’s certainly understandable why such a fearsome creature would attune to it! While holding a tome of the stilled tongue, you can cast any spell written down the book (which works as a spellbook and arcane focus) as a bonus action and without expending a spell slot or using any verbal or somatic component. Imagine being able to do that with a 9th-level spell once per day! This tome is utterly insane, and if you’re a wizard, it’s the item of your dreams!

A vorpal sword and wave (the trident on the title photo) are +3 weapons that are similar in the sense that they can outright kill an opponent in a single critical strike without any kind of saving throw. In the case of wave, if you score a critical hit with it, the target takes extra necrotic damage equal to half its hit point maximum. Vorpal sword, on the other hand, cuts off the head of the opponent, so unless we’re talking about an ettin or a hydra, that’s probably going to kill it – plus, it’s just way more badass than dealing necrotic damage (which many creatures are also resistant to)! However, the head-lopping feature of the vorpal sword is reserved for creatures without any legendary actions – and the DM may even decide that a creature without that is simply too big for its head to be cut off with the weapon. All in all, both of these weapons are truly legendary, and I think they both deserve to be within the top 5! 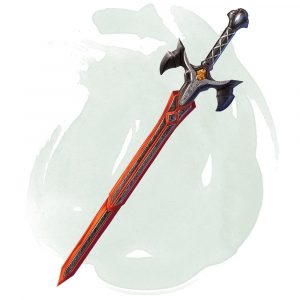 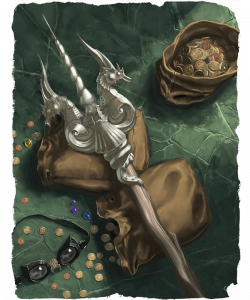 6. Robe of the Archmagi

A robe of the archmagi certainly lives up to its name. It gives you a base AC of 15 + your dex (2 higher than what mage armor does) and advantage on saving throws against spells and other magical effects, both of which are great! What really makes this garment great is that it increases your spell save DC and spell attack bonus by 2. Very few items increase your spell save DC in D&D 5e, and for good reason – it’s extremely powerful! 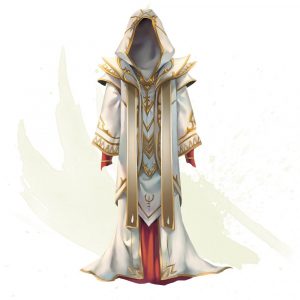 Like the other weapons on this list – there are many, I know! – a holy avenger comes with a wobbling +3 to damage and hit and does an additional 2d10 radiant damage against fiends or undead. Most importantly it gives a permanent circle of power –  effectively giving you and all creatures friendly to you in the aura advantage on saving throws against spells and other magical effects. If you have 17 or more levels in the paladin class, the radius of the aura increases to 30 feet! If you’re not a paladin, however, you can’t attune to it. Sorry. 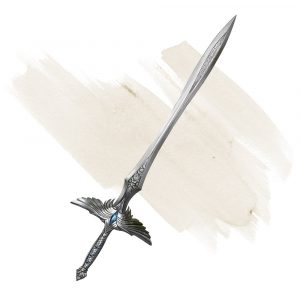 8. Staff of the Magi

This staff is packed with so much magic that I’m not even going to try and list it. Besides giving you +2 to spell attacks, advantage on all saving throws, and numerous at-will spells, a staff of the magi has 50 charges that can be used to cast some crazy stuff such as plane shift and telekinesis, to name a few. The main feature of the magic staff, however, is that it lets you absorb the magic of spells that target only you as a reaction without any kind of check! Doing so even refills the charges on the staff equal to the level of the spell. Crazy stuff. 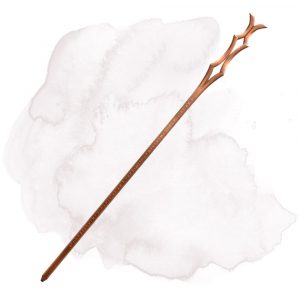 I can’t really think of a campaign where placing either a talisman of pure good or a talisman of ultimate evil would ever be a good idea. The two items basically do the same, but can only be attuned to by a good or evil-aligned creature respectively (or well, the good one actually has 7 charges instead of 6, but since they do the same, I’m guessing that’s a mistake or a “the good must win” decision). 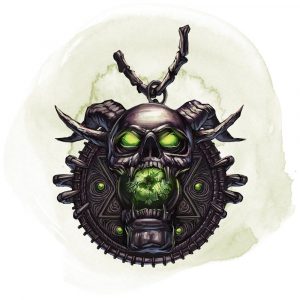 Whatever the case, spending a single charge on this talisman on a creature of opposite alignment than the talisman opens up a flaming fissure beneath it. If the target then doesn’t succeed on a DC 20 Dexterity saving throw, it falls into the fissure and is destroyed, leaving no remains. The description even goes on to say that the fissure “then closes, leaving no trace of its existence”!

Since there are next to no ways to increase your ability scores above 20 in D&D 5e, I think a belt of storm giant strength deserves a spot in the top 10. While wearing this belt your strength score becomes 29. Find a way to make yourself huge, and even an ancient dragon will have a hard time winning a grappling match against you!

It doesn’t get more epic traveling in time – and for that reason alone, a scroll of time travel definitely deserves an honorable mention on a list of the best legendary magic items!

If you’ve watched Back to the Future or the Marvel’s Avengers movies, you’ll know that time travel can present numerous questions regarding the flow of time, changing the past, and so on – questions you’ll want to consider before allowing the heroes of your 5E game to go back in time to kill the unprepared, young version of your campaign’s BBEG. Well, all of those questions are addressed in Wanderer’s Guide to Merchants & Magic where this scroll is featured as one of 120 new magic items! 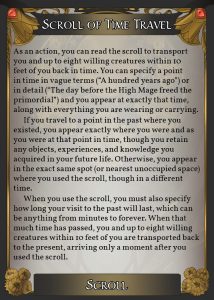 Wanderer’s Guide to Merchants & Magic provides a total of 120 new magic items, numerous ready-to-play magic shops, price lists for magic items, and everything else you need to make magic items a fun and easy part of your 5E adventure, so check it out, if you haven’t already.

That concludes our picks for the best legendary magic items in the Dungeon Master’s Guide and basic rules of D&D 5e! Once again, I’ve tried to select the items I believe to be the most powerful, but these items are not necessarily the best bet for your character or for you as a DM. For example, while I’d personally never hand out a talisman of pure good, I can imagine many situations where cool items such as sovereign glue or a deck of many things would be fun to play at the table, even though they too can be very powerful.

Anyway, let us know in the comment sections if you think we’ve missed any legendary magic items on our list – and share your own top picks!

And, since this article is about magic items in D&D 5e, check out our new sourcebook Wanderer’s Guide to Merchants & Magic which is packed with ready-to-play magic shops, new magic items, prices lists, and everything else you need to make magic items a fun part of your game in D&D 5e! 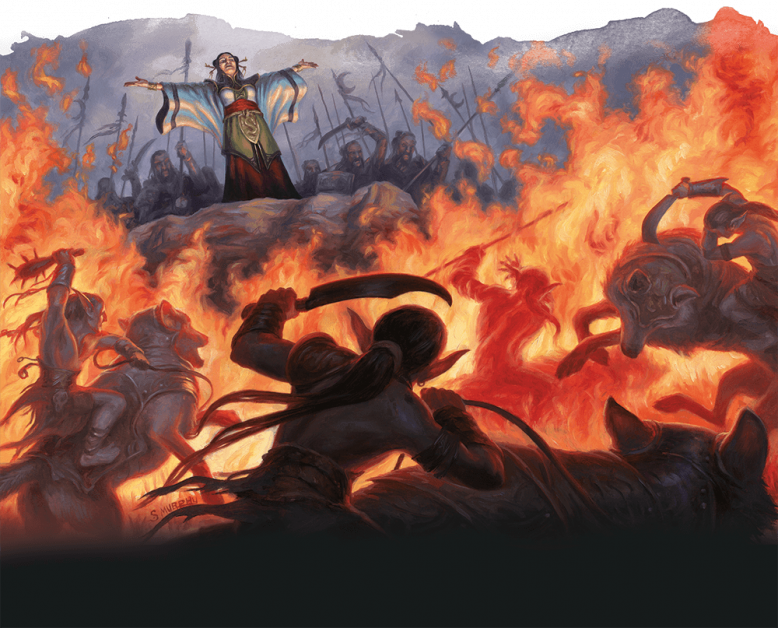 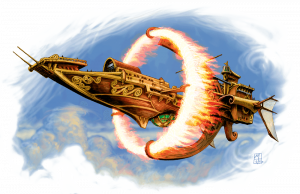