Magic items play a huge role in 5E D&D, but answering even simple questions such as what magic items costs, where to buy them, and how to sell them, is no easy task as a DM.

In this series, we are taking a deep dive into the problems of dealing with magic items in 5E – and, of course, how to solve them!

Let’s start by taking a look at how to price magic items in 5E D&D!

Wanderer’s Guide to Merchants & Magic has 166 pages of magic shops and new magic items, including price lists for all magic items in the 5E SRD!

One of the biggest issues with magic items in 5E D&D has to do with pricing.

Every magic item has a certain rarity: common, uncommon, rare, very rare, legendary, or artifact. Rarity is supposed to work as a rough estimate for the item’s relative power level, and – if your campaign allows for trading magic items – also helps set the price tag on an item.

Rarity, in other words, is meant to measure not only the availability of an item (how difficult it is to find) but also how powerful and valuable it is.

While it makes sense to have the relative power of a magic item determine its value, if you look closely at certain items in the 5E DMG, it quickly becomes apparent that rarity doesn’t always reflect how powerful or useful an item is.

The main issue has to do with the fact that we’re ONLY using rarity to determine value. Just because something is rare doesn’t mean that it is in high demand, and if no one wants it, it’s likely not very valuable. Rarity covers supply, the missing link here is demand.

Of course, determining the value of a magic item will often be subjective – as it is with fine art in the real world – and it’s logical that a rare item that is only useful in a very specific situation can be more expensive than a much more sought-after but mass-produced item.

But this can only be the case to some degree, and there are quite a few cases where you can objectively say that in nearly all situations, one item is clearly a lot better than another, even though it is more common.

Take potion of invisibility as another example.

A  potion of invisibility is a very rare, consumable item, so by the official guidelines, it should cost between 2,500 gp and 25,000 gp. I’m not saying a potion of invisibility isn’t great, but it mimics a 2nd-level spell, and yet has the same value as at least five cloaks of protection (an uncommon item listed at 101-500 gp that grants +1 to AC and all saving throws).

And that’s if you sold the potion for the lowest price, and bought the cloaks at their highest price! If you took the highest estimated value for a very rare item and the lowest for an uncommon item, one potion of invisibility would be worth almost the same as 250 cloaks of protection!

I personally like the simplicity of having items sectioned by rarity, it’s easy, and it’s something I’m familiar with from other games. The problem arises when the rarity becomes the only factor in determining value within a very wide price range.

One solution is to decouple value from rarity and instead base an item’s value on your perception of supply and demand, and the item’s power. However, this means you’d have to price each individual item on the fly at the table, which is easier said than done.

You could also just accept that rarity reflects an item’s value and go ahead and change some of the official rarities on specific items accordingly.

Wanderer’s Guide to Merchants & Magic takes things a step further by providing individual prices for all the most popular magic items in 5E based on a combination of their rarity and their power level. 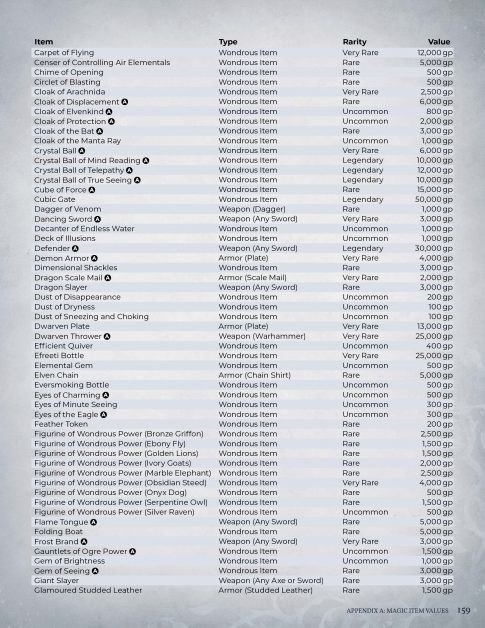 List of magic item values from the Wanderer’s Guide to Merchants & Magic.

When actually dealing with a player buying or selling an item, you should also consider their skills (or lack thereof) at negotiating.

If you price items based on their rarity be mindful that the suggested prices have a pretty wide range (a very rare item is worth between 5,001 gp and 50,000 gp, for example).

However, if you don’t trust your own judgment on these things, or just prefer not to think too hard about it, I’d recommend starting a negotiation with the maximum price for an item (based on its rarity) if a player is buying an item, and then letting the players bargaining skills determine how low it can go.

The DMG doesn’t provide hard rules for bargaining, but discounts of up to 50% should be attainable – which should also be taken into account if you price each item individually!

You can allow players to haggle by making a Persuasion or even Performance check, perhaps with an opportunity for advantage or a lower DC if the merchant takes a liking to them for one reason or the other.

As for selling magic items, it’d make sense that the characters’ best possible sale price is half the listed maximum price. It’d start out even lower than that at the lowest price range for that rarity.

By doing this, you also avoid over-inflation and characters constantly swapping out magic items and getting insanely rich over lucky loot drops.

Finally, there’s the matter of determining what gold is actually worth.

If you stick to the prices in the DMG, or close to it, the value of magic items is still relative to how much gold the PCs have, but in one game 500 gp could be a dragon’s hoard, while in the other, it’s barely pocket change for a 2nd-level PC!

If you allow magic items to be bought and sold in your game, the more gold you give the characters relative to the items’ prices, the more magic items they’ll have! In the end, the most important thing is picking a level of relative wealth and being consistent with it.

For a high-magic campaign you can use the wealth guidelines on the page below from the Wanderer’s Guide to Merchants & Magic. 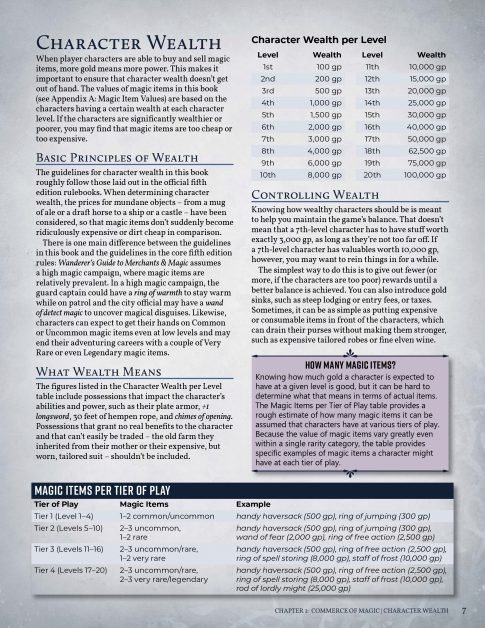 I love magic items, I love to give them to my players (maybe too much!), but pricing them can be really hard as a DM. Just remember:

I think that covers the basics when it comes to pricing magic items in 5E. And, if you want set values for the most popular magic items, and detailed rules for handling price negotiations in a fun and easy way at the table, be sure to check out Wanderer’s Guide to Merchants & Magic.

Haggling and bartering for a better (or worse!) price is also something we will cover in greater detail in our next article where we open the door to magic shops, how to design them, and how to run them at your table! 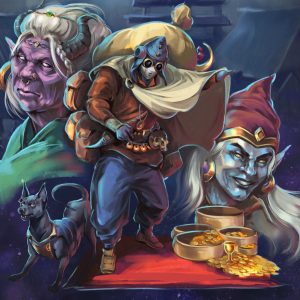