In this article, I’ll go into depth with the duergar conspiracy that is likely to guide the action of Rime of the Frostmaiden from around 3rd to 6th level. This is done following the loose structure outlined in Part 2: Structure and building upon the start laid out in Part 3: Starting Strong and Part 4: Northern Ten-Towns. If you haven’t read those articles, you may want to do that first – but even if you don’t, I’ll try to make sure you can follow along regardless.

As this series focuses primarily on the adventure’s overall story and structure, whatever we go into detail with below has to do with guiding the action, adding more foreshadowing, and tying various storylines (Auril, Xardorok Sunblight, and the Arcane Brotherhood) more closely together. For more details on how to run individual encounters, locations, and quests, check out the DM’s Resources for Icewind Dale: Rime of the Frostmaiden.

Alright, without further ado – let’s get into it. 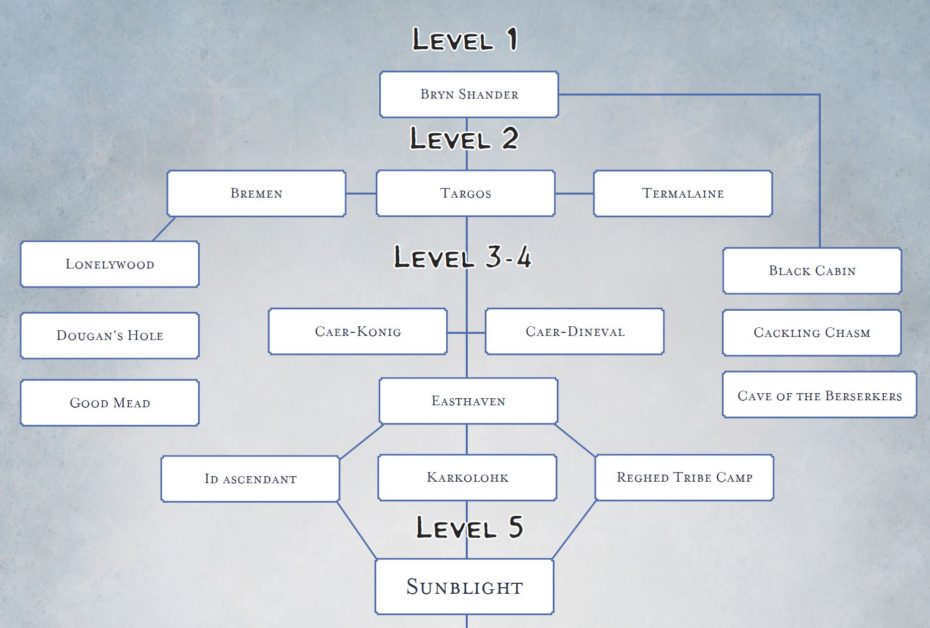 If you’re following a structure somewhat similar to what was laid out in Part 4: Northern Ten-Towns, the characters have been rummaging around the northern part of Ten-Towns for the first few levels. When they – and you – are good and ready, it’s time to steer them toward the southern towns, where they can begin to unravel the duergar conspiracy, which is what this article is about.

The duergar conspiracy is the pivotal plot of the first half of Rime of the Frostmaiden, where the characters must try to stop the duergar Xardorok’s crazed plan to unleash a chardalyn dragon on Ten-Towns. As laid out in the book, there’s essentially three places in Ten-Towns the characters can learn more about this plot:

The way it’s laid out, it’s clearly the intention that the characters first visit Caer-Konig, learn about Durth’s hideout in Easthaven, and then go there to pick up the map showing the location of Sunblight Fortress.

It makes sense for the characters to visit the towns in this order (Caer-Konig first, then Easthaven), as it’s the way the investigation will feel most earned. That being said, you don’t lose much if the characters (whether by accident or design) don’t do things in this exact order and instead first run into the duergar in Easthaven or Caer-Dineval, so don’t worry too much about it.

All told, these locations can run pretty much as they are described in the book, except that we’ll add some extras:

Below, I’ll go over how to accomplish each of these things. 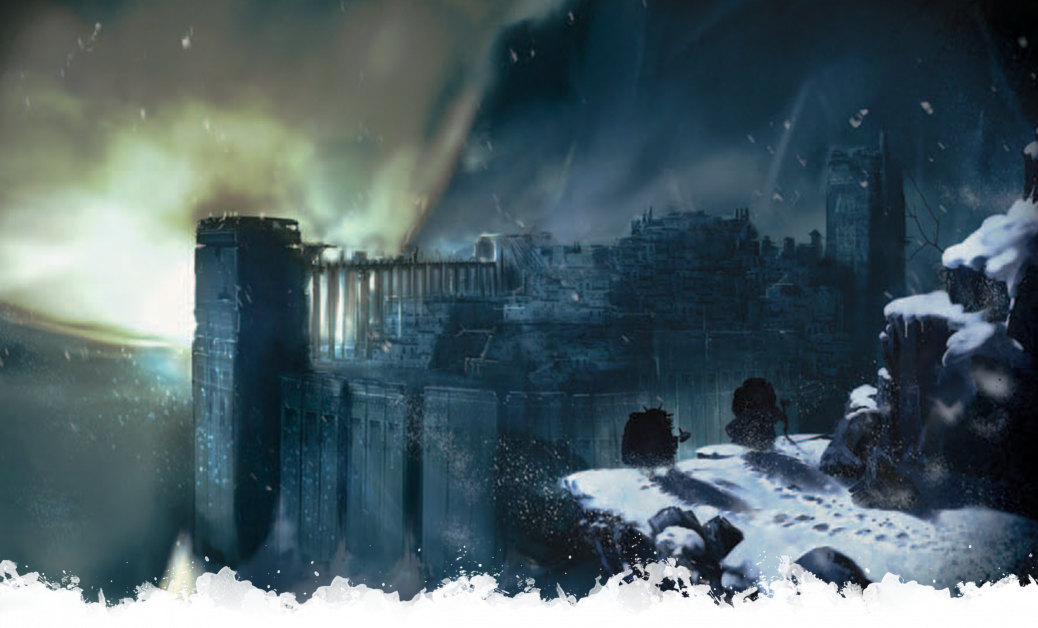 As I’ve stated a few times by now, one of my issues with Rime of the Frostmaiden is that the adventure’s three stories (Auril’s Everlasting Rime, Xardorok and his duergar, and the Arcane Brotherhood’s search for Ythryn) aren’t very closely tied together. One way to improve these ties is by having Auril’s Frost druids work more closely with the duergar.

In this scenario, it was Auril herself who approached the Lord of the Nine, Asmodeus, and suggested that he manipulate the duergar Xardorok to conquer Icewind Dale, after she had learned that a tiefling guided by Levistus (Avarice, pg. 269) was among the wizards looking to find Ythryn.

In doing so, she hopes to use Xardorok and his minions to both devastate the already troubled Ten-Towns, pushing them further into desperation and toward worshipping her, and to put an end to the Arcane Brotherhood’s search for Ythryn. For his part, Asmodeus risks little by following along while potentially foiling the plans of the ambitious Levistus.

Further cementing this alliance, Auril or Geluvicken (see Part 1: Background) has tasked the frost druids in Ten-Town with aiding the duergar’s search for chardalyn, while Xardorok has ordered the duergar to report any information about wizards or anyone else looking for ruins to the frost druids (these messages are carried back and forth by messenger birds).

If the characters discovered the cache of chardalyn in the elven tomb near Lonelywood (see Part 4: Northern Ten-Towns), they may already have learned of the connection between Auril’s druids and the duergar. Below are some additional ways you can highlight this relationship.

Any duergar magically interrogated at the outpost near Caer-Konig knows that Nildar was expecting a shipment of chardalyn from a druid near Lonelywood in the next couple of days. The chardalyn usually comes on a sled dragged by awakened wolves.

Also, in addition to the crumpled-up letter from Durth on his desk, Nildar also has a note to himself on his desk, written in crude Dwarvish runes: “Tiefling wizard in Caer-Dineval. Arcane Brotherhood? Tell druid’s beasts.” Nildar received this information from the duergar holed up in Caer-Dineval, who has taken notice of Avarice’s presence in the town.

If the characters investigate the Caer and end up speaking with Hethyl Arkorran, the old soothsayer also tells them that Auril’s frost druids and the duergar are working together against Ten-Towns, although she may not know specifically how or why.

The characters can find one or two letters (at your discretion) in the cabin aboard the Easthaven Ferry: 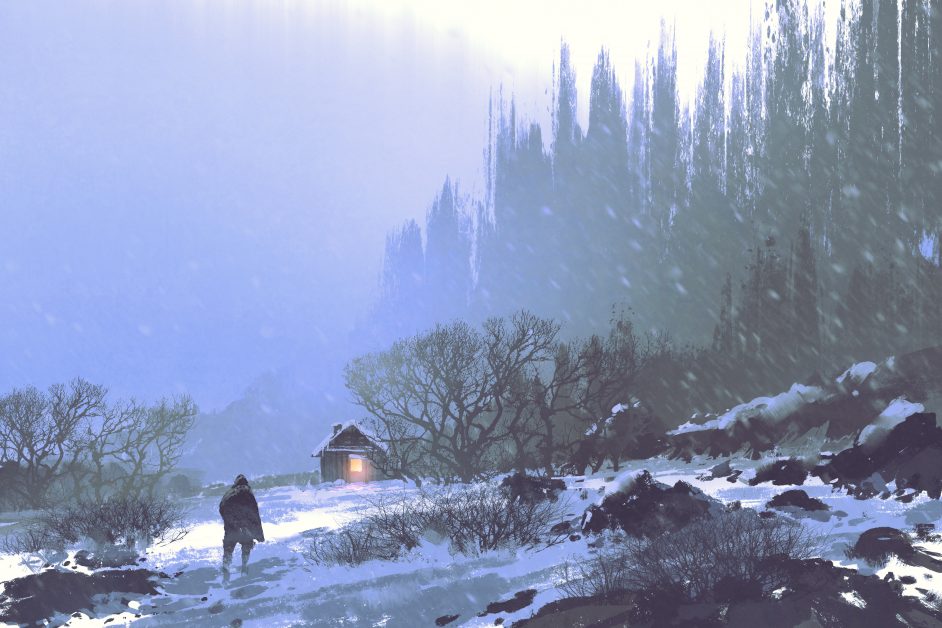 To make it more likely that the characters can actually handle Chapter 3 & 4, and to include more content from Chapter 2: Icewind Dale, we can add in some extra steps between the characters learning about the duergar’s plans and their arrival at Sunblight Fortress.

To do this, we must first make it harder to find the fortress. Here’s some ways to do that:

Next, we need some ways for them figure out where Sunblight Fortress is, so they can go stop Xardorok. How exactly we do this depends on the characters and their circumstances, but could involve:

Lastly, we also have to include some new, alternate ways to find the fortress. Here are some options:

You can, of course, come up with additional options, as there’s plenty of ways the characters may be able to learn the location of the duergar’s fortress. In the end, it’s up to you which and how many options you want to present them with – although I’d recommend giving them at least two options and probably no more than three.

Below, I’ll go over the three examples given here (Karkolohk, Reghed Tribe Camp, and Id Ascendant) in more detail.

The goblin camp provides a good place to start the search for Sunblight Fortress, as its chieftain, Yarb-Gnock, has recently sued for peace, so he’s likely to be willing to help.

The DMs resources have a lot more information about running Karkolohk, but below is the quick rundown of how you can set it up:

The characters may also opt to seek out one of the Reghed tribes, to see if the barbarians know the location of Sunblight Fortress. There’s a few different ways you can have this work out.

One way to do it is by repurposing the ‘Wolf Tribe Cannibals’-quest from chapter 2. As the characters realize the Reghed Tribe may know more, they also learn about Aluka, who can be found in the next town over. When they approach her to ask her help in finding Sunblight Fortress or a Reghed Tribe Camp, she can give them her ‘Wolf Tribe Cannibals’-quest, which they must complete to get the information (either from her or from one of the tribe’s barbarians). As with the goblins in Karkolohk, the Reghed barbarians know the location of Sunblight Fortress because they have been selling chardalyn to the gray dwarves.

Another way is to have the characters strike out and find a Reghed Tribe Camp on their own (perhaps using a local guide). As they do, the tribe in question does not immediately know where Sunblight Fortress is, but they have seen both chardalyn and gray dwarves near a cave not too far away. Recently, however, several members of the tribe have been attacked by crazed berserkers seemingly inhabiting these caves.

At the ‘Cave of the Berserkers’, the characters run into chardalyn berserkers as written, but also find the dismembered bodies of a few duergar, who had come to the cave looking for chardalyn, only to wind up slain by the berserkers. Luckily for the characters, one of these duergar were carrying a map showing the location of Sunblight Fortress.

Note that as written, both the ‘Reghed Tribe Camp’ and the ‘Cave of the Berserkers’ can be pretty tough for 4th-level characters, so you may want to dial them down a bit. For more in-depth information on how to run these locations, check out the DM’s resources.

Lastly, we can rework the ‘Distress Signal’-mission from chapter 2, so that it provides a way to find Sunblight Fortress. Whether they know about the psychics already or are told about them by someone, the characters can meet up with a group of four Ten-Towners with psychic abilities that can help them locate Sunblight Fortress. Setting this up is described in more detail in the DM’s resources, but basically the four Ten-Towners each have different psychic abilities and especially Nars Beldrun, who can cast divination, and Telvaster Hangingbell, who can cast locate object/creature with an extended radius, should be helpful.

However, the distress signal from the ‘Id Ascendant’ is preventing them from using their psychic powers. Which means the characters must first visit ‘Id Ascendant’. You can run this location more-or-less as it is described in the book, which also makes it appropriate for a party of 4th-level adventurers (as long as they don’t attempt to kill everything on sight).

Once they have cleared out the fortress, the psychics – happy to have their powers back – can quickly determine the location of the fortress and the characters can be on their way to stop Xardorok!

In the book, it’s simply assumed that the characters will discover the duergar’s plot and set out to stop Xardorok and his dragon. If that doesn’t happen on its own, the book does provide an alternate hook, which more or less boils down to a Speaker seeking out the party, unloading a bunch of exposition about the duergar and their plans, and asking the characters – without any reward! – to go stop Xardorok and save all of Ten-Towns!

Both scenarios only appeal to decidedly selfless and altruistic characters, offering little incentive to more pragmatic and greedy characters. For a more tangible reward, you can have the Speaker (or other city official) offer all the provisions and equipment they need for the journey, as well as a potential reward of up to 1,800 gp for saving Ten-Towns: 100 gp from each of the six smaller towns, and 300 gp each from Bryn Shander, Easthaven, Targos, and Termalaine. They only receive a town’s reward if they successfully prevent that town from being destroyed by the dragon, which adds additional incentive to move fast and save as much of Ten-Towns as possible!

Let’s wrap everything up with an example. As always, this isn’t a blueprint or a step-by-step guide, but just one way events could unfold:

In the next article, it’s time to tackle the middle part of Rime of the Frostmaiden, which means going over the way Chapter 3: Sunblight and Chapter 4: Light’s Destruction fits together, as well as how we can alter Vellynne’s introduction and repurpose her quest to make the latter part of Rime of the Frostmaiden less linear and include more of Chapter 2: Icewind Dale.

In the meanwhile, if you’re looking for more in-depth advice on running and balancing various scenarios, encounters, and locations in Rime of the Frostmaiden, as well as DM’s resources such as DM’s notes, cheatsheets, item handouts, and full-color encounter maps for Icewind Dale, check out the Complete DM’s Bundle for Icewind Dale: Rime of the Frostmaiden here. If you just want some cool maps for your game, you can also just pick up the maps right here on eventyrgames.com.

Have fun and keep it cool,

1 thought on “Running Rime of the Frostmaiden – Part 5: Duergar Conspiracy”