Help us continue to make posts such as these by supporting our Patreon.

When I first read through the WotC’s newest published campaign Icewind Dale: Rime of the Frostmaiden, my initial reaction was:

“Holy crap, there’s a lot of cool stuff in here!”

That’s an impression I stand by. Rime of the Frostmaiden is a great book, with a lot of amazing content created by some extremely creative and talented people.

But – and there is a but! – my second thought when reading the book was:

And that is also an impression I stand by.

Running Rime of the Frostmaiden can be difficult. 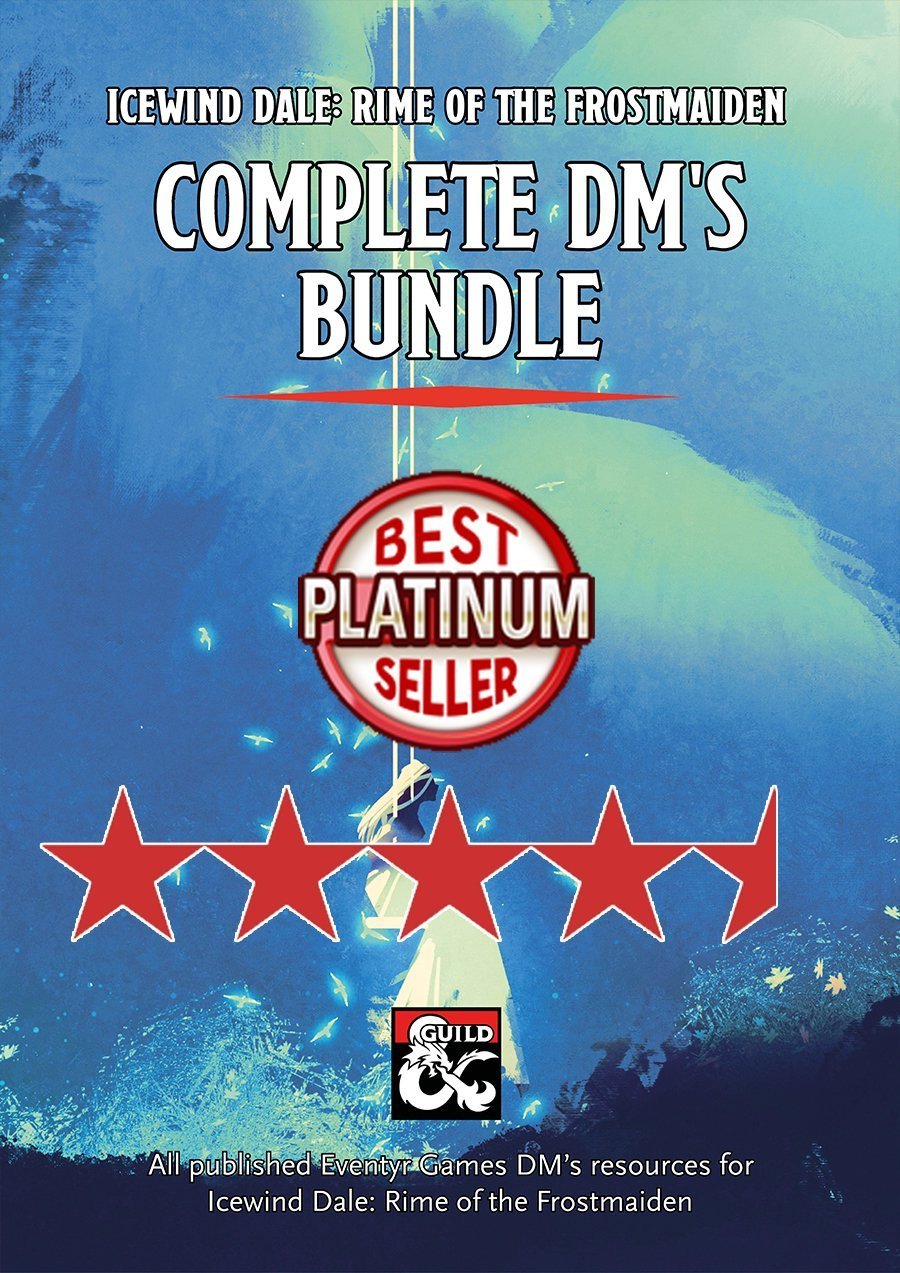 This series won’t go into detail with every little issue or encounter – that’s what our DM’s resources are for – but instead offers a top-level look at the story and structure of each chapter and the adventure as whole, giving advice on how to make it more cohesive and easier to run.

Without further ado, let’s take a look at what the issues with Rime of the Frostmaiden is and how this series will attempt to fix them.

Issues with Rime of the Frostmaiden

Before we set to work fixing anything, we need to know what to fix. So, what are the issues with Rime of the Frostmaiden?

If we boil it down, the primary issue is with the campaign’s overall cohesiveness.

Rime of the Frostmaiden tries to do a lot of cool things, show off a bunch of cool locations, and set up a bunch of cool events. It does so really well for the most part – but doesn’t do as well when it comes to actually tying these locations and events into a cohesive story that 1) is easy for the DM and players to follow, 2) keeps player characters properly motivated, and 3) has a natural transition from chapter to chapter.

Realizing that this is a bit vague, let’s exemplify these issues while taking a closer look at Rime of the Frostmaiden’s story and structure: 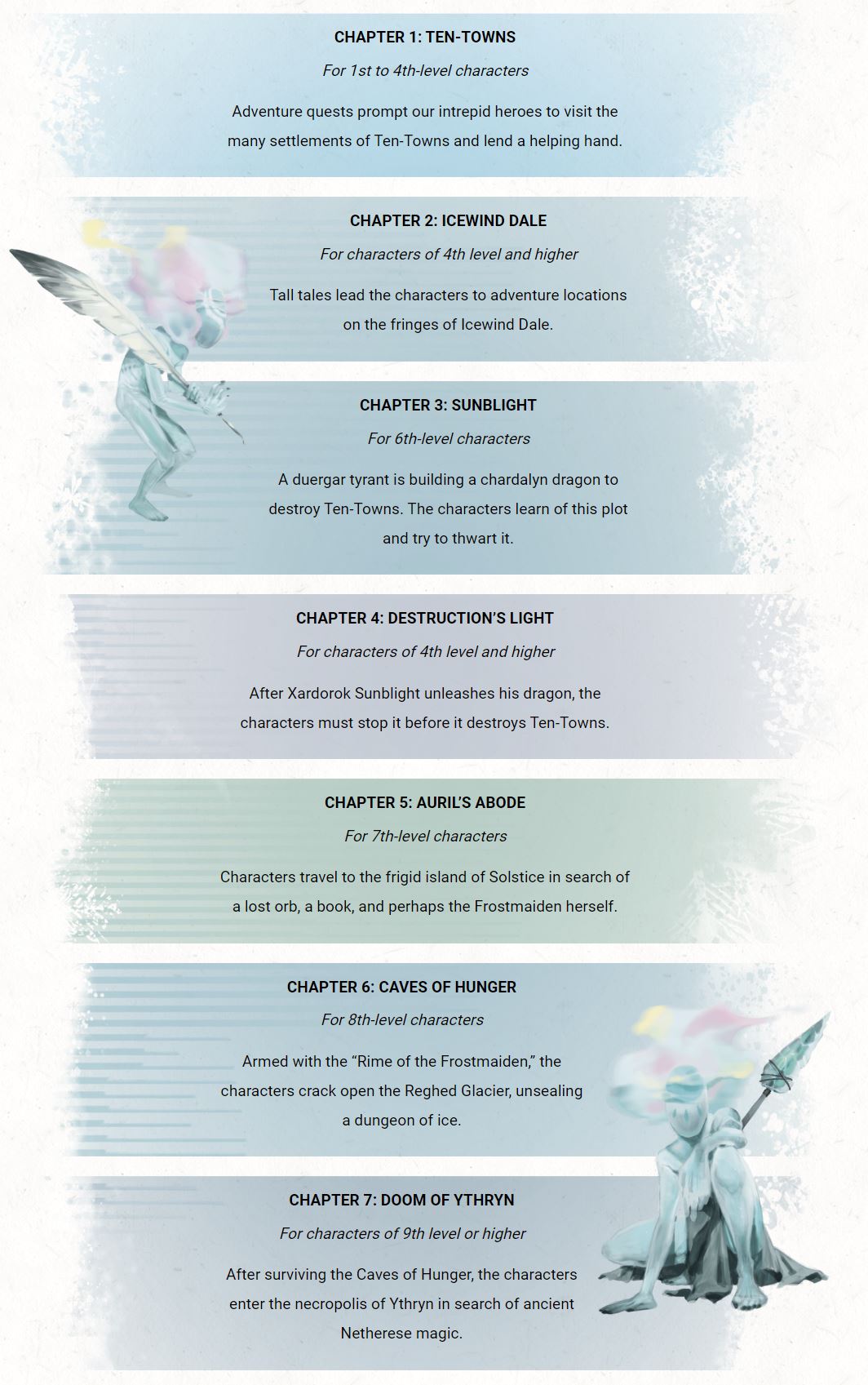 Rime of the Frostmaiden’s Story & Structure

From the book’s title and the marketing, as well as how the book begins, Rime of the Frostmaiden seems to be an adventure about saving Icewind Dale from a spell of cold and darkness cast by the goddess Auril.

As the adventure starts out, the characters can certainly feel the effects of this situation, but they can’t really do anything about it – yet. Instead, they are put into a sandbox setting (Chapter 1: Ten-Towns and Chapter 2: Icewind Dale), where they can roam around freely and complete minor quests. There isn’t much direction given to the DM about how to structure events or foreshadow the later chapters, except some guidelines for at which levels the other chapters of the book should begin.

So, after a few levels of free play in Icewind Dale, the characters eventually learn of a great threat to Icewind Dale – but it isn’t Auril and her spell, as one might have assumed. Instead it is a duergar who’s building a chardalyn dragon that will soon fly out to destroy Ten-Towns, and so the story progresses into Chapters 3 & 4 with a subplot that is only very loosely connected to the main story.

Once that issue has been resolved, the characters are finally given some more information about the main plot (which we would perceive as ending Auril’s spell of darkness), as they meet Vellynne. The necromancer dumps a whole bucket of exposition on them, informing them that:

The characters then travel to the Island of Solstice and begin Chapter 5, where they can potentially encounter Auril herself – and, if they manage to defeat her, end her spell of darkness right then and there. If they do so, they have essentially finished the adventure before Chapter 6 & 7 even begin, making the subsequent journey into Ythryn something of an afterthought, and without clear purpose (beyond looting the ancient ruins).

All told, I find that there are three primary issues with Rime of the Frostmaiden:

Structure. The story lacks structure in the beginning (Chapters 1 & 2), but becomes linear and exposition-heavy in the later chapters (Chapters 5, 6 & 7). The start – a complete sandbox – puts a lot of work on the DM’s shoulders, who has to figure out some way to guide events. The ending – from Vellynne’s exposition dump at the end of Chapter 4 to the characters’ arrival in Ythryn – is completely on rails, allowing the characters little choice about how to proceed.

Motivation. The characters don’t have a clear purpose as they start out and when larger story points – stopping Xardorok, ending Auril’s Everlasting Rime, finding Ythryn – are introduced, the characters are often given only shallow or inconsistent incentives to pursue them. Sometimes they are given no greater reason than ‘because it’s the right thing to do’ or ‘because I’m asking you’, while at other times they are supposed to be motivated only by the vaguest promises of treasure.

Exposition & Foreshadowing. Lastly, there’s issues with exposition and foreshadowing throughout. There’s too much of the former and too little of the latter – much of the interesting information about the adventure’s background or upcoming events and plot points are simply told to the player characters, instead of being something they learn more about more organically and as a result of actions they take.

Running Rime of the Frostmaiden – Overview

Alright, so now that the main issues – as I see them – with Rime of the Frostmaiden have been identified, let’s take a look at how the Eventyr Edition is meant to tackle them.

The primary purpose of the Eventyr Edition is to shore up some of Rime of the Frostmaiden’s shortcomings, enhance the adventure’s strengths, and provide a loose structure for the adventure that will make the game easier to run for the DM, tie the story better together, and ensure that both players and their characters are kept interested and motivated throughout.

The guiding principle in the Eventyr Edition is to accomplish the above while changing as little as possible about the actual content – various locations, encounters, and NPCs – in the book. You should be able to use 90% of the book’s contents exactly as written, even though we’re making some rather big changes to how the story unfolds. In short, the Eventyr Edition isn’t a complete remix of the adventure – it’s more like a remaster.

By only making subtle or at least ‘isolated’ changes, it is also possible – and even advisable – for you to use only the changes you like and disregard any changes you don’t like. Most of the changes we make won’t impact the story further ahead in the adventure, so you should be able to take what you like and leave the rest.

In brief summary, the Eventyr Edition includes the following changes to the adventure:

7 thoughts on “Running Rime of the Frostmaiden – Introduction & Overview”