Tasha’s Cauldron of Everything is here – and deserves a review!

The newest official sourcebook (at the time of writing!) contains a plethora of character options, spells, magic items, and various expanded rules and Dungeons Master’s tools.

So much new content, in fact, that it probably deserves several reviews. So, my review of Tasha’s Cauldron of Everything will be split into several parts, as I try to cover – well – everything.

In this first article, I’ll go over the new options for customization provided in the start of Tasha’s Cauldron of Everything: the various guidelines to customize your character’s origin (race) and the new rules for changing skills and subclasses after 1st level. 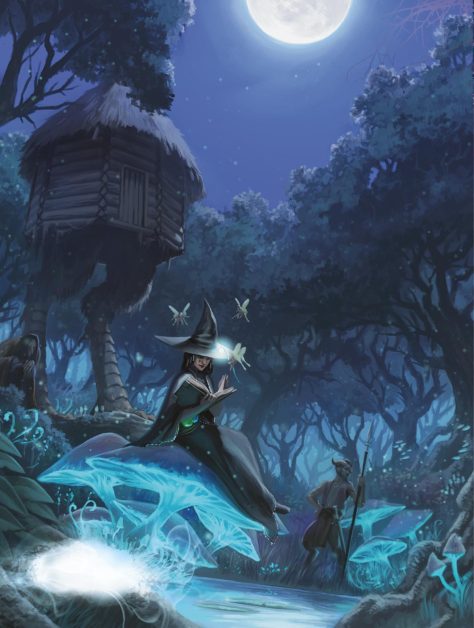 One of the most widely debated concepts introduced by Tasha’s Cauldron of Everything is the idea of customizable origins (or races, whichever you prefer).

In essence, Tasha’s presents optional rules that allow characters to:

Personally, none of this is controversial to me. I’ve long allowed players in my games to choose whichever ability score increases they like, as well as swap languages, skill proficiencies, and so on (within reason).

At my table, we go by the rule of cool – so if you want to be a half-orc wizard raised by elves, but don’t wanna gimp yourself mechanically, I have no issue letting you gain a bonus to Intelligence instead of Strength.

Some of the apprehension I’ve seen comes from a fear of abusing this kind of customizability to make incredibly powerful characters. And yeah, I can see that – but in the end, if a player is prone to that kind of behavior, that’s not a fault of the rules, nor something rigid rules will fix.

And remember, it’s still up to the DM to decide whether or not to use these optional rules, and to approve whatever combinations a player comes up with. In my personal experience, the main effect of allowing customizability like this is that you get more diverse race/origin choices, which I always find much more interesting than just having at least half the characters be Variant Humans.

That said, I can definitely see the Custom Lineage replacing the Variant Human as the go-to option. Being able to both get a +2 ability score increase, Darkvision, and a Feat at 1st level – that’s a dream package!

Next up, Tasha’s Cauldron of Everything also provides guidelines for allowing player characters to change their skills and subclasses at later levels.

Given my thoughts above, it shouldn’t be a big surprise that I find these rules to be perfectly fine as well. I’ve even made an easy-to-use system for using skill points instead of proficiencies, so I think it’s fair to say that I don’t believe rules for skill proficiencies need to be restrictive. In fact, I’d take the rules for changing skills provided in Tasha’s even further and allow characters to choose new skills from outside their class list.

As for changing subclasses, I’ve always allowed this as well. In the end, if a player isn’t having fun with their subclass or think they would have more fun with another, I think they should be able to change it – we’re here to have fun, after all.

Whether you want that to include a period spent retraining, or just figure out to handwave or otherwise explain it, is up to you and the player. Tasha’s provides some guidelines and inspiration for this, which I think is good – in my experience, it’s always better to have rules you can ignore if you don’t like them, than to not have rules at all, when you find you need them.

In summary, while Tasha’s rules for customizing and changing origins, proficiencies, and subclasses probably won’t add much new to my table, I think it’s a breath of fresh air for fifth edition overall. I welcome optional customizability and versatility wherever it is provided, as I feel like more (balanced) options can only strengthen the game, especially when there’s an emphasis on optional, as is the case with these rules.

I’d also urge any of the vocal critics of these ideas to remember that – these rules are optional. If you don’t like them, don’t use them. But maybe try them out, see if they’re really as bad as you think. Who knows, maybe you’ll be surprised.

In conclusion, I think that Tasha Cauldron of Everything’s rules for player character customization are a fair, balanced, and welcome addition to fifth edition D&D.

3 thoughts on “Review – Tasha’s Cauldron of Everything (Part I: Customization)”