How to use skill points in 5E?

One of the gripes I often see players and DMs have with fifth edition D&D has to do with the game’s very simple – and quite rigid – skill system.

In this post, I’ll describe how you can replace 5E’s skill proficiency system with Skill Points – yeah, those nifty little things you may remember from earlier editions of Dungeons & Dragons!

Of all the house rules I have exposed my patient players to over the years, this rule is the most popular by far. My players love it because it is optional, has minimal effect on game balance, and expands character options without actually changing the game.

The Issue with Skill Proficiencies

First off, why would you even want to change the way skills work in 5E?

The best thing about this system is its simplicity: if your character is good at something, you add its proficiency bonus – which only changes at levels 5, 9, 13 and 17 – to that skill check.

Simplicity comes at a cost, however – less customization and character diversity. In earlier editions of D&D (and systems such as Pathfinder), you would spend Skill Points each level, choosing which skills to progress in.

This allowed a character to not only be better at some skills than others (something that is only possible with the Expertise-feature in 5E), but also to easily pick up new skills (something that can be done during downtime, or with feats, class features, and items in 5E).

In our games, we’ve found that while fifth edition’s simple skill system served us well in the start, allowing especially newer players to easily get a grasp on things, the system eventually felt a bit too constrained. Several of my players expressed dissatisfaction with not being able to pick up new skills as they gained levels, or asked if it would be possible to ‘split’ proficiencies among several skills, so they could gain more skill diversity.

So, I began looking for a solution. But not just any solution. Since some of my other players had no issue with the skill proficiency system and preferred to stick with it, I had to find a solution that was not only simple and easy to implement, but also balanced against the existing system, so players could opt in or out as they preferred. 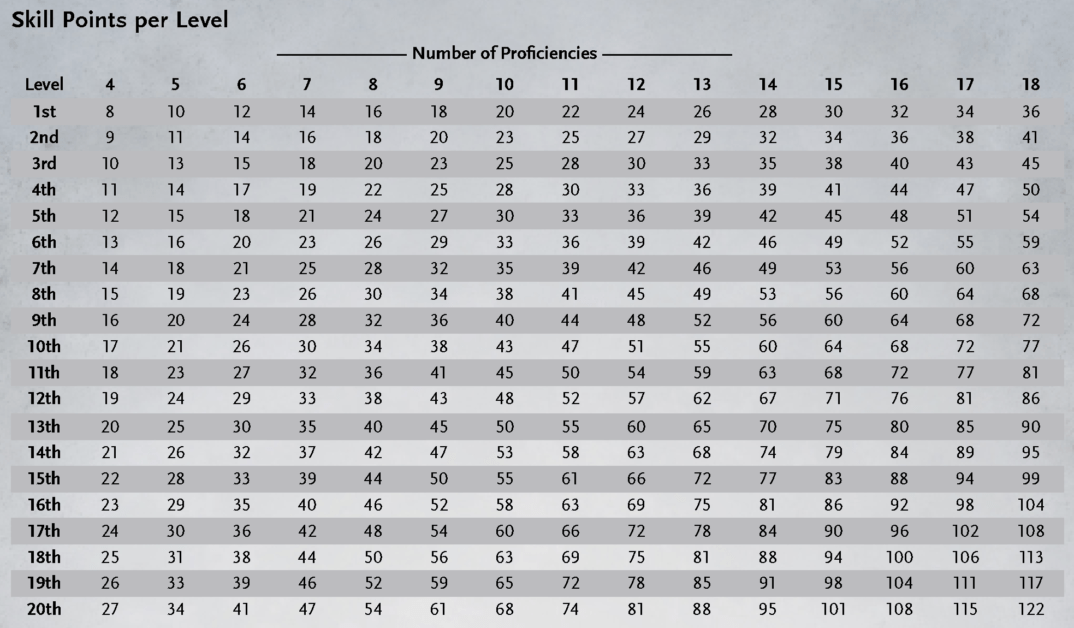 If you’re not a fan of tables, you can also use the following formula of conversion:
Skill Points (rounded down) = ((Proficiencies/4) x (Level – 1)) + (2 x Proficiencies)

Just look at this beauty! I know, I know, at first glance it doesn’t look simple at all – but it truly is, trust me.

What we do with this table is convert the number of skill proficiencies a character would have into Skill Points instead.

At 1st level and every level after that, you then assign these Skill Points to your character’s different skills, and voíla – you’re now using Skill Points instead of skill proficiencies.

This means that everything else about the game stays the same – what proficiencies characters get from what races, classes, features, etc. – but instead of directly assigning these proficiencies, you instead note the total number of proficiencies your character has, and then consult the table to see how many Skill Points it has instead.

Because this system changes nothing about everything else in the game, you can have half the players at the table use Skill Points, while the other half continues using skill proficiencies. Yay!

Here’s a few quick examples of how the conversion works:

While the system is fairly simple and the conversion is straightforward, there’s a few ground rules that needs to be established:

When using Skill Points, there’s also some additional rules that the DM can enforce, at their discretion:

Alright, so I’ve been touting this as a houserule that has nearly no effect on the balance of the game, and which can be employed selectively – with some players using Skill Points, while others continue to use skill proficiencies. But is that really true?

Well, let’s be honest – of course a character won’t ever become weaker because its using Skill Points.

First off, Skill Points are more versatile, and versatility is never a drawback. Simply having access to more different skills can be a strength.

I would argue, however, that this only makes a character using Skill Points marginally stronger, and only in specific situations. As long as each player has the choice of whether they want to use Skill Points or not, I think this system is more than fair, even if some players opt out – there’s been no issues at my tables, at least.

Even if problems should arise, reverting back to skill proficiencies, or allowing a player who changes their mind to use Skill Points instead, can be done very quickly and without issues.

You can also choose to only let characters get new skill points when their proficiency would increase (levels 5, 9, 13, and 17), although I feel this somewhat defeats the purpose of Skill Points. But whatever you think works best at your table – that’s what you should do.

So what are the drawbacks of using Skill Points instead of skill proficiencies?

The only real drawback is added complexity.

First off, there’s a bit more thinking and calculations to do each level (“eh, how many skill points do I have this level? Let me check out the table…”).

Second, you have to have different numbers written down for each skill, instead of just noting which skills your character is proficient in and what your proficiency bonus is. This means that players may have to consult their sheets more frequently while playing.

Overall, I think that this added complexity is a relatively minor drawback, but it’s still probably best to reserve this system for more experienced players. Again, it’s totally possible to allow veteran players to experiment with using Skill Points, while newer players at the table keep using skill proficiencies until they feel comfortable adding in more complexity.

So, what do you think about these rules for converting skill proficiencies into Skill Points? Are you going to try them out? Do you see any room for improvement? Let me know in the comments below! And, don’t forget to sign up for our mailing list and follow Eventyr Games on Twitter or Facebook to receive updates about similar content in the future.